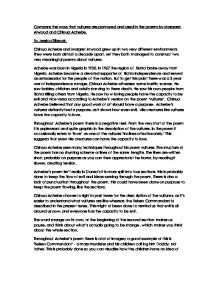 Compare the ways that vultures are portrayed and used in the poems by Margaret Atwood and Chinua Achebe. By Jessica Tilbrook. Chinua Achebe and Margret Atwood grew up in two very different environments. They were born almost a decade apart, yet they both managed to construct two very meaningful poems about vultures. Achebe was born in Nigeria in 1930. In 1967 the region of Biafra broke away from Nigeria. Achebe became a devoted supporter of Biafra independence and served as ambassador for the people of the nation. But to get this point there was a 3 year war of independence ravage. Chinua Achebe witnesses some horrific scenes. He saw babies, children and adults starving to there death. He saw his own people from Biafra killing others from Nigeria. He saw how loving people have the capacity to be evil and vice versa according to Achebe's version on the poem 'vultures'. ...read more.

Throughout Achebe's poem there is a lot of imagery a good example of this is 'Belsen Commandant' - a mass murderer and his children calling him Daddy, not father. This is probably done so you can visualise how the children have no idea of what there father has actually done, and they are treating him like normal. This is quite emotional to read, as you can imagine this really happening. Another example of Achebe's imagery is the metaphors he uses to describe death and horror. In the first section it says 'vulture perching high on broken bones of a dead tree'. This makes the atmosphere more intense, and builds up the tension from the very beginning. There is some alliteration in the poem, but there are not many references to sound. I think Achebe wants to concentrate on more visual images rather than sound effects to suggest his ideas. ...read more.

Also Atwood says the vultures were flapping their black umbrellas this makes them out to seem huge evil animals. The structure of Atwood's poem is done very well, as she occasionally puts odd words on a separate line to make you think about the poem in more depth. The poem is sort of in stanza's but there isn't maybe, which helps the poem keep flowing. All of the lines in the poem are roughly the same length, apart from the occasional odd word. I think it makes the poem easier to read, and get the rhyme flowing at the right pace. Margret Atwood uses a variety of meaningful and powerful words. For example 'carnage' 'violate' 'gluttonous' all these words have a negative impact on vultures. As they are explaining why and how they are vile creates. But some people might say that the way vultures act is completely natural. This is because it is natural for them to eat, which means killing other animals, to feed themselves and there family. Which shows this poem is also quite ambiguous. ...read more.