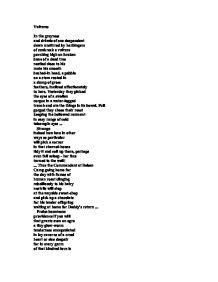 Vultures In the greyness and drizzle of one despondent dawn unstirred by harbingers of sunbreak a vulture perching high on broken bone of a dead tree nestled close to his mate his smooth bashed-in head, a pebble on a stem rooted in a dump of gross feathers, inclined affectionately to hers. Yesterday they picked the eyes of a swollen corpse in a water-logged trench and ate the things in its bowel. Full gorged they chose their roost keeping the hollowed remnant in easy range of cold telescopic eyes ... Strange indeed how love in other ways so particular will pick a corner in that charnel-house tidy it and coil up there, perhaps even fall asleep - her face turned to the wall! ... Thus the Commandant at Belsen Camp going home for the day with fumes of human roast clinging rebelliously to his hairy nostrils will stop at the wayside sweet-shop and pick up a chocolate for his tender offspring waiting at home for Daddy's return ... Praise bounteous providence if you will that grants even an ogre a tiny glow-worm tenderness encapsulated in icy caverns of a cruel heart or else despair for in every germ of that kindred love is lodged the perpetuity of evil. ...read more.

* The concentration camp Commandant cannot escape the evil deeds he has spent the day performing - the fumes of human roast [cling] rebelliously to his hairy nostrils (line 32). The word roast makes us think of food, so it is doubly repulsive that he then buys chocolate for his tender child (or children) on the way home. Imagery and Sound Imagery * The opening of the poem is dark. The greyness (line 1) is heightened by the heavy alliteration in drizzle of one despondent dawn (line 2) and even the approaching sunbreak (line 4) does not lift the atmosphere. * There are metaphors of horror and death: the dead tree (line 6) branch on which the vultures are roosting is described in as a broken bone (line 5), while the male vulture's bashed-in head is a pebble on a stem (line 9) and its body is a dump of gross feathers (line 11). * In the second section, the vultures' affection leads the poet on to muse about the nature of love. Love is personified as a woman finding a place to sleep. ...read more.

Choose a short quotation to justify your choice. Ideas The ideas in this poem concern the relationship between evil and love. In the first part the vultures are used as a symbol for the paradox that evil and love can co-exist; in the second part Achebe uses the Belsen Commandant as an actual example of this. Have a look at the quotations below, and our suggestions about how they fit in to this theme. Key phrase Commentary Strange .. Strange is isolated in a single-word line. This makes us dwell on the word and prepares us for the image of love settled in an evil place. By the end of the poem, Achebe shows that even the most evil people experience kindred love, but that love is not powerful enough to halt the evil. ..they picked / the eyes of a swollen / corpse .. Achebe picks the most gruesome images he can find when describing the vultures to emphasise their evil. This prepares us for the human evil he goes on to explore. for in the very germ...is lodged the perpetuity of evil. It is poignant that Achebe concludes the poem with the idea of the predominance of evil. Evil is lodged within love - and evil is the haunting final word of the poem. ...read more.