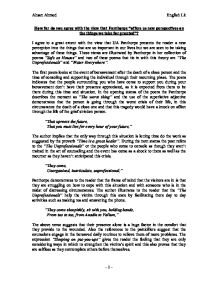 W far do you agree with the view that Fanthorpe &quot;offers us new perspectives on the things we take for granted&quot;?

How far do you agree with the view that Fanthorpe "offers us new perspectives on the things we take for granted"? I agree to a great extent with the view that UA Fanthorpe presents the reader a new perception into the things that are so important in our lives but we are seen to be taking advantage of these things. These views are illustrated by Fanthorpe in her collection of poems "Safe as Houses" and two of these poems that tie in with this theory are "The Unprofessionals" and "Water Everywhere". The first poem looks at the event of bereavement after the death of a close person and the time of consoling and supporting the individual through their mourning phase. The poem indicates that the people surrounding you who have come to support you during your bereavement don't have their presence appreciated, as it is expected from them to be there during this time and situation. In the opening stanza of the poem the Fanthorpe describes the moment as "The worst thing" and the use of the superlative adjective demonstrates that the person is going through the worst crisis of their life, in this circumstance the death of a close one and that this tragedy would have a knock on affect through the life of the grief stricken person. ...read more.

The poet exaggerates the length of time it takes for the victim to recover from the dreadful pain of a close one's death by suggesting that these events of "The Unprofessionals" is ongoing and everlasting. "Through the immortality of all the seconds, Until the blunting of time." The poets stress on the seconds helps exaggerate the length of time it takes to recuperate from an event of a sorrowful nature. However the final line makes evident that time is the greatest of healers as the use of the word "blunting" is symbolic of a blade, which is no longer sharp signifying that after time has had its say your pains would have diminished. The next poem which I will analyze discusses how people seem to take one of Gods greatest creations of water for granted. In the opening line the author believes that water is a God in its independence and that know one officially recognizes it as a divine being. "Officially they do not acknowledge this god. Officially they honour assorted immortals In stone buildings with pioneering roofs." In the first stanza the poet is referring to the sacred places of worship that have been built with the finest material and stand out from all other buildings. Fanthorpe brings to mind the "pioneering roofs" of mosques, churches and temples where "they honour" heavenly immortals. ...read more.

The next stanza is also comical for the reader as the weathermen on different channels are compared to "ministers of god" as they preach to the worshippers of what the water god has proposed for them. "Ministers of the god Recite on different airways his moods and intentions. The people claim not to believe. But they listen." The above extract demonstrates the humour which Fanthorpe portrays in her work as she uses the common belief that weather forecasters are always predicting incorrectly but the majority of British society still ends up listening. The opening line of the penultimate verse "there literature is great. They never read it" is related to the line above as they both accuse people of not speaking the truth and this also links in with the idea that people don't acknowledge that they worship the water god. In the finale of the poem UA Fanthorpe speaks her mind by stating that humans take the form of water for granted and implies that this makes them ignorant of their surroundings. The two poems above that I have analyzed clearly demonstrate that the view that Fanthorpe offers her readers an original perception on the things that we humans take advantage of and that we should consider ourselves to be lucky to have these things for example in the form of water and friends which no one can live without. Ahsan Ahmed English Lit - 1 - ...read more.