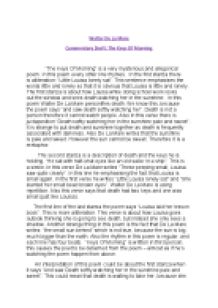 ﻿Walter De La Mare Commentary Draft: The Keys Of Morning ?The Keys Of Morning? is a very mysterious and allegorical poem. In this poem every other line rhymes. In the first stanza there is alliteration: ?Little Louisa lonely sat?. This sentence emphasises the words little and lonely so that it is obvious that Louisa is little and lonely. The first stanza is about how Louisa while doing school work looks out the window and sees death watching her in the sunshine. In this poem Walter De La Mare personifies death. We know this, because the poem says ?and saw death softly watching her?. Death is not a person therefore it cannot watch people. Also in this verse there is juxtaposition ?Death softly watching her in the sunshine pale and sweet?. ...read more.

The first line of the last stanza the poem says ?Louisa laid her lesson book?. This is more alliteration. This verse is about how Louisa goes outside thinking she is going to see death, but instead she only sees a shadow. Another strange thing in this poem is the fact that De La Mare writes: ?the small sun behind? which is not true, because the sun is big, much bigger than the earth. Also the rhythm in this poem is regular, and each line has four beats. ?Keys Of Morning? is written in third person, this causes the poet to be detached from the poem ? almost as if he?s watching the poem happen from above. ...read more.

It says in the first stanza Louisa is lonely, and no other human apart from Louisa is mentioned in the poem. Maybe someone Louisa knew died recently, so she imagined a shadow was death. This poem is ambiguous? things can be understood in two or more ways such as the keys. No one knows why the keys are there or what they mean. They could symbolise big people and small people. For example: one key for children and one for adults. Another interpretation could be that the keys mean heaven and h**l. Maybe one of the keys would be for Louisa when she dies, and she has to make a choice the biggest or the littlest. We don?t see things as they really are. In ?The Keys Of Morning? De La Mare questions ideas of children and death. Death was a widely questioned theme when Walter De La Mare wrote ?The Keys Of Morning?. ...read more.