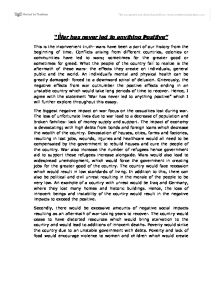 War has never led to anything Positive Discuss

"War has never led to anything Positive" This is the inconvenient truth- wars have been a part of our history from the beginning of time. Conflicts arising from different countries, colonies or communities have led to wars; sometimes for the greater good or sometimes for greed. What the people of the country fail to realize is the aftermath of these wars- the effects they create on individuals, general public and the world. An individual's mental and physical health can be greatly damaged- forced to a downward spiral of delusion. Grievously, the negative effects from war outnumber the positive effects ending in an unstable country which would take long periods of time to recover. Hence, I agree with the statement 'War has never led to anything positive" which I will further explore throughout this essay. ...read more.

The country would face recession which would result in low standards of living. In addition to this, there can also be political and civil unrest resulting in the morale of the people to be very low. An example of a country with unrest would be Iraq and Germany, where they lost many homes and historic buildings. Hence, the loss of innocent beings and instability of the country would result in the negative impacts to exceed the positive. Secondly, there would be excessive amounts of negative social impacts resulting as an aftermath of war-taking years to recover. The country would cease to have distorted resources which would bring starvation to the country and would lead to additions of innocent deaths. ...read more.

The devastation of war encouraged countries such as Japan to work toward building a powerful economy- which Japan is today. Social advancements and increased knowledge of neighboring countries through war are also considered positive impacts of war. Wars had both positive and negative outcomes, but those positive outcomes still do not justify the number of people lost due to it. In conclusion, there were both positive and negative effects of war. Unfortunately, the negative effects would overpower the positive outcomes resulting in war to be destruction regionally. It is the inconvenient truth that war is a troublesome part of our world- a burden people must face in their lifetime. War is not only a way of love but is an adaptation tool in sculpting a society for the better or worse. So how should we end these wars? There is only one answer: In living with peace, love and harmony. ...read more.

This response is consistently relevant to the set question. The student also displays an awareness of counter-argument which limits bias. However, this student appears far too subjective in the introduction; Ã¢â‚¬Å“I agree with the statement Ã¢â‚¬Ëœwar has never led to ...

This response is consistently relevant to the set question. The student also displays an awareness of counter-argument which limits bias. However, this student appears far too subjective in the introduction; Ã¢â‚¬Å“I agree with the statement Ã¢â‚¬Ëœwar has never led to anything positiveÃ¢â‚¬â„¢Ã¢â‚¬Â almost renders the remainder of the response as being unnecessary. Introductions should be used to introduce main areas of discussion, while reaching valid and well-considered conclusions should be contained within the conclusion itself.

Although examples are used to reinforce argument, these are extremely vague; Ã¢â‚¬Å“GermanyÃ¢â‚¬Â¦ where they lost many homes and historic buildingsÃ¢â‚¬Â. A possible solution here would be to provide Ã¢â‚¬ËœshockingÃ¢â‚¬â„¢ facts such as the comprehensive destruction of specific German cities in WWII. This sets a trend for the rest of the response, in which areas of discussion are severely underdeveloped. For example, the counter-argument in paragraph four is concluded with Ã¢â‚¬Å“these positive outcomes still do not justify the number of people lost due to itÃ¢â‚¬Â, which given the excellent detail preceding it, seems out-of-kilter with the rest of the response. Argumentation appears disjointed and unfocused; the student should attempt to apply a Point Evidence Explain system instead of leaping around at whim from one topic to another. For example, after making a point, always ask yourself Ã¢â‚¬Ëœwhy is this significant?Ã¢â‚¬â„¢

The quality of writing is largely accurate. However, there is a somewhat peculiar adoption of tense, with the student making using Ã¢â‚¬Å“wouldÃ¢â‚¬Â excessively Ã¢â‚¬â€œ the clearest example of this can be seen in paragraph three. A simple solution would be to remove it entirely; Ã¢â‚¬Å“poverty strikes governments with instability and debtÃ¢â‚¬Â sounds far more fluent. Inconsistency of tense is often considered difficult for GCSE candidates. Writing appears most impressive in the introduction and conclusion as in the example of hyphens and semi-colons used correctly. However, repeated words are an issue within the response, as can be seen from the five instances of Ã¢â‚¬Å“countryÃ¢â‚¬Â in paragraph two. A well-used thesaurus would improve the fluency of writing; Ã¢â‚¬ËœinstitutionÃ¢â‚¬â„¢ or Ã¢â‚¬ËœstateÃ¢â‚¬â„¢ could be inserted into the essay.