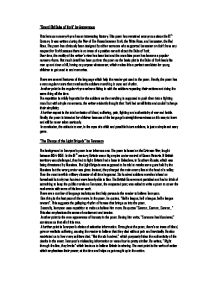 "Grand Old Duke of York" by Anonymous This famous nursery rhyme has an interesting history. This poem has remained anonymous since the 15th Century. It was written during the War of The Roses between York, the White Rose, and Lancaster, the Red Rose. The poem has obviously been designed by either someone who supported Lancaster or didn't have any respect for York because there is no trace of a positive remark about the Duke of York. Over time, the reality of the writer's view has been lost and the once bias poem has become a popular nursery rhyme. Not much detail has been put into the poem as the basic plot is the Duke of York leads his men up and down a hill, having no purpose whatsoever, which makes this a perfect candidate for young children to get used to and memorise. There are several features of the language which help the reader get used to the poem. ...read more.

Then the most terrible military disaster of all time happened. Six hundred soldiers marched ahead on horseback but only two hundred were barely able to flee. The British Government panicked and had to think of something to keep the public morale so Tennyson, the respected poet, was asked to write a poem to cover the real events with some of his known work. There are a number of language techniques that help persuade the reader to believe Tennyson. One thing is the fast pace of the metre. In the poem, he quotes, "Half a league, half a league, half a league onward". This suggests the galloping rhythm of horses that brings us into the poem. Secondly, Tennyson uses repetition to make us believe him more. He quotes "Cannon...Cannon...Cannon..." This also emphasises the sense of excitement and tension. Another point is the rare appearance of honesty in the poem. ...read more.

This states the obvious that the Drummer boys were killed first, a senseless waste of youth. /8105285925825836+ The British were under control of Queen Victoria, who had experienced a lot but was on her last legs, and she was completely committed to winning this war. Eventually, the British won the war but that was Queen Victoria's last success. She died in 1901, which also meant the death of the British Empire. Afterwards, Thomas Hardy wrote a poem of protest against people using children as Thomas Hardy used several techniques to create the setting of the Boer War. For example, he uses adjectives like "young" and "fresh". This reminds us of just how inexperienced the drummer is and the use of the word "fresh" describes that he is just an object like fresh meat, in the eyes of his "superiors". Going in another direction, the repetition of his name "Hodge" four times which makes the poem far more. The uses of African words like "kopje-crest...veldt...Karoo" makes it seem more realistic and native. ...read more.