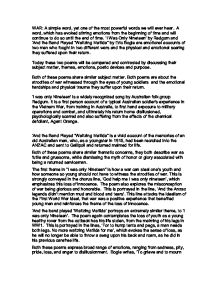 War Poems. I Was Only Nineteen by Redgum and And the Band Played Waltzing Matilda by Eric Bogle are emotional accounts of two men who fought in two different wars and the physical and emotional scaring they suffered upon their return.

WAR: A simple word, yet one of the most powerful words we will ever hear. A word, which has evoked stirring emotions from the beginning of time and will continue to do so until the end of time. 'I Was Only Nineteen' by Redgum and 'And the Band Played "Waltzing Matilda" by Eric Bogle are emotional accounts of two men who fought in two different wars and the physical and emotional scaring they suffered upon their return. Today these two poems will be compared and contrasted by discussing their subject matter, themes, emotions, poetic devices and purpose. Both of these poems share similar subject matter. Both poems are about the atrocities of war witnessed through the eyes of young soldiers and the emotional hardships and physical trauma they suffer upon their return. 'I was only Nineteen' is a widely recognized song by Australian folk group Redgum. It is a first person account of a typical Australian soldier's experience in the Vietnam War, from training in Australia, to first hand exposure to military operations and combat, and ultimately his return home disillusioned, psychologically scarred and also suffering from the effects of the chemical defoliant, Agent Orange. ...read more.

The poem again contemplates the loss of youth as a young healthy rover from the outback has his life stolen, from the maiming of his legs in WW1. This is portrayed in the lines, 'For to hump tents and pegs, a man needs both legs. No more waltzing Matilda for me', which evokes the sense of loss, as he will no longer be able to throw a swag upon his back and roam, as he did in his previous carefree life. Both these poems express broad range of emotions, ranging from sadness, pity, pride, loss, and anger to disillusionment. Bogle writes, 'To grieve and to mourn and to pity' express the sense of emotions that family feel when they see the once strong, healthy, young men carried off the ship broken and shattered upon their return from Gallipoli. In contrast, Redgum's poem expresses the emotion of pride in the line, Mum and Dad and Denny saw the passing out parade. One can feel the sense of pride his parents and brother must have felt at the time of his passing-out parade, as indicated by the family's full attendance. ...read more.

"God help me, I was only nineteen" is repeated throughout 'I was only Nineteen', to remind the reader of how "young and strong and clean" most of the young conscripts were when they went to Vietnam, reinforcing the thematic concern that a loss of innocence is the major result of war. In conclusion the reader can see how similar these poems are. Both poems are written in song form, and both clearly illustrate the scaring that young men carry after they return from war. 'The Band Played Waltzing Matilda', deals with the physical scarring of a man maimed from losing his legs while to "I was only Nineteen" deals with the emotional scarring and post-traumatic stress of a returned soldier from the Vietnam War. Both poems also dismiss the myth that war is glorious and heroes all return home, as both poems describe vividly how many men die on the battlefields and therefore do not return home. It is no surprise that both these poems have become award winning songs, as they both project the physical and emotional scarring suffered by veterans through the use of various poetic techniques, such as imagery, rhyme, repetition and onomatopoeia. ...read more.