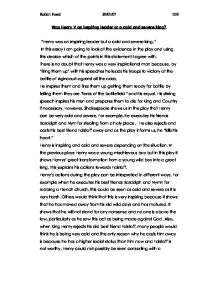 Was Henry V an inspiring leader or a cold and severe king?

Was Henry V an inspiring leader or a cold and severe king? "Henry was an inspiring leader but a cold and severe king." In this essay I am going to look at the evidence in the play and using this decide which of the points in this statement I agree with. There is no doubt that Henry was a very inspirational man because, by 'firing them up' with his speeches he leads his troops to victory at the battle of Agincourt against all the odds. He inspires them and fires them up getting them ready for battle by telling them they are "lords of the battlefield" and his equal. His stirring speech inspires his men and prepares them to die for King and Country if necessary. However, Shakespeare shows us in the play that Henry can be very cold and severe. For example, he executes his friends Bardolph and Nym for stealing from a holy place. He also rejects and casts his best friend Falstaff away and as the play informs us, he "kills his heart." Henry is inspiring and cold and severe depending on the situation. In the previous plays Henry was a young mischievous boy but in this play it shows Henrys' great transformation from a young wild boy into a great king. This explains his actions towards Falstaff. ...read more.

This shows that he is raising the troop's social status and therefore boosting their morale. At Harfleur he says "God for Harry, England, and Saint George!' This is a very inspiring way to finish his speech because he is calling himself Harry; therefore he is lowering his status so that he is equal to his soldiers. Here Shakespeare used a tri-colon this emphasises the point and make the speech more persuasive. Also, he is saying: 'do it for God, do it for me, do it for the country but most of all do it for yourselves'. Henry would inspire the troops with this speech because they are fighting for England and are thus very proud of being English. This speech would have had a great effect on the crowd, at the time the Spanish Armada was invading and everyone was very proud to be English. The speech would have made the crowd very inspired and would have fired them up. In his speech Henry says "Stiffen the sinews" he uses alliteration here and it makes the reader spit out the words. The quote makes the whole speech seem more intense and violent. When Henry says "When the blast of war blows in our ears" This quote onomatopoeia shows that war is a terrible place. In this case at Harfleur he is very inspiring. ...read more.

In conclusion I think that Henry is a very inspiring leader because he takes time to see how his troops are feeling. He makes inspiring speeches that make his troops want to fight in battle for him. Henry is mostly inspiring because of the transformation that he makes throughout the play: at the beginning of the play he is a young childish boy. As the play progresses he matures more and more. You can see this by the way he executes the traitors before the war because they were plotting against him, and when he executes Bardolph and Nym for robbing a French church. This shows that he is moving on from his younger wild days when he was friends with all of these people, he has rejected them and that shows that he has matured. Also, I think the main point where he showed that he has matured was when he let the French King stay on the throne and keep watch over France, this was a very clever strategy. I think that Henry is a very inspirational man and other people should learn from the things he has done, we should learn to treat others with respect as he did to his troops. We should not think that we are better than other people just because we have better material possessions or have had a privileged education and upbringing, we should treat everyone with the same amount of respect. ?? ?? ?? ?? Robert Foard 30/01/07 10E ...read more.