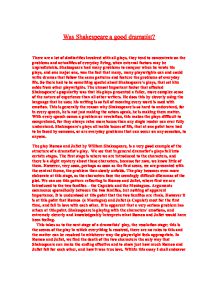 Was Shakespeare a good dramatist?

Was Shakespeare a good dramatist? There are a lot of similarities involved with all plays, they tend to concentrate on the problems and actualities of everyday living, when external factors may be unpredictable. Shakespeare had many problems to conquer when he wrote his plays, and one major one, was the fact that many, many playwrights can and could write dramas that follow the same patterns and feature the problems of everyday life. So there had to be something special about Shakespeare's plays, that set him aside from other playwrights. The utmost important factor that affected Shakespeare's popularity was that his plays presented a fuller, more complex sense of the nature of experience than all other writers. He does this by cleverly using the language that he uses; his writing is so full of meaning every word is used with emotion. This is generally the reason why Shakespeare is so hard to understand, for in every speech, he is not just making the actors speak, he is making them matter. With every speech comes a problem or revelation, this makes the plays difficult to comprehend, for they always raise more issues than any single reader can ever fully understand. Shakespeare's plays all tackle issues of life, that at one point have had to be faced by someone, or are everyday problems that can occur on any occasion, to anyone. The play Romeo and Juliet by William Shakespeare, is a very good example of the structure of a dramatist's play. We see that in general dramatist's plays fall into certain stages. The first stage is where we are introduced to the characters, and there is a slight mystery about these characters, because for now, we know little of them. However, very soon, perhaps as soon as the first scene, we are presented with the central theme, the problem then slowly unfolds. The play becomes even more elaborate at this stage, as the characters face the seemingly difficult dilemmas of the plot. ...read more.

Black and Portentous must this humour prove unless good council may the cause remove'. This is a long speech made by Lady Montague, regarding her son. She feels that he is edging day by day more away from life. This is a long speech that must be quoted in full to give the full effect of it, it is an example of the issues that everyday people go through, that I wrote of during the introduction. What Lady Montague was telling Benvolio, was that most mornings he has been seen there, with tears to add to the morning dew, however as soon as the sun showed, he leaves for his own bedroom, and shuts himself in there. Benvolio and Montague, exchange words with each other, to find out if either of them know the cause of Romeo's sadness. Benvolio enquires whether Montague has asked Romeo of his troubles - Montague replies that 'Both he and many other friends' had tried to find out the problem, but Romeo would not tell of his plight. Suddenly Romeo enters, and Benvolio quickly tells Romeo's parents to leave, and let Benvolio find out what's wrong with him. Benvolio greets Romeo with the words; 'Good morrow cousin' To which Romeo replies, 'Is the day so young?' This shows us that Romeo does not pay attention to anything but his trouble, because he is not aware of whether it is day or night. 'What sadness lengthens Romeo's hours?' This is a question asked by Benvolio to Romeo, he is trying to find out what is upsetting his cousin so badly. Romeo replies to Benvolio; 'Not having that which, having, makes them short.' Benvolio; 'in love?' Romeo; 'out.' Benvolio; 'of love?' Romeo, 'out of her favour where I am in love.' This is a short sentenced conversation between two cousins, in which Romeo tells of his problem, and that is to love someone who does not return that love. ...read more.

Capulet insists that he is endured, and when Tybalt refuses yet again, Capulet is angry with Tybalt for being so brazen. Romeo now makes his first move on Juliet at his first opportunity. He talks to her eagerly, at first Juliet resists, but Juliet sees that she loves him to, and does not want to resist, and the conversation ends with Romeo asking for a kiss, and then Juliet accepting. From the words that Juliet uses, you can tell that the emotion is real, what is being said between these people is real emotion. The couple leaves each other when Juliet is called to by her mother. Romeo asks the nurse who called Juliet, when Juliet has gone, who her mother is. She tells him that she is the daughter of the Lady Capulet. Romeo has realised that he is now faced with a bigger problem than when he thought he loved Rosaline. He simply says, 'O dear account! My life is my foe's debt.' Juliet asks her nurse to find out who the man she was talking with (Romeo) is, the nurse tells her that it is Romeo, the only son of the Montagues. Juliet is stricken, the pain in the words when they both find out who one-another are, is so emotional and realistic, that it upsets people who read. Juliet says, 'My only love, sprung from my only hate! Too early seen unknown, and known too late! Prodigious birth of love it is too me, that I must love a loathed enemy. Now that act 1 has been explained, we can see all the mixed up emotions felt by all the different actors who had there own opinions, as well as there own troubles. Romeo and Juliet the play, is a complicated web of feelings, where we know that nothing can come of but sadness, and hurt. Shakespeare was a very good dramatist, he was set apart from all other dramatists, by his sense of style, and the way he expressed the emotions of the characters perfectly with just the right words. ...read more.