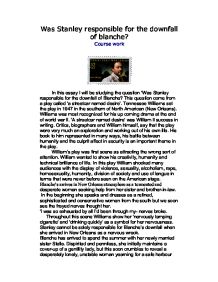 Was Stanley responsible for the downfall of blanche? - A Street car named desire.

Was Stanley responsible for the downfall of blanche? Course work In this essay I will be studying the question 'Was Stanley responsible for the downfall of Blanche? This question come from a play called 'a streetcar named desire'. Tennessee Williams set the play in 1947 in the southern of North American (New Orleans). Williams was most recognized for his up coming drama at the end of world war ll. 'A streetcar named desire' was William ll success in writing. Critics, biographers and William himself, say that the play were very much an exploration and working out of his own life. His book to him represented in many ways, his battle between humanity and the culprit affect in security is an important theme in the play. William's play was first scene as attracting the wrong sort of attention. William wanted to show his creativity, humanity and technical brilliance of life. In this play William shocked many audiences with the display of violence, sexuality, alcoholism, r**e, homosexuality, humanity, division of society and use of langue in terms that were never before seen on the American stage. Blanche's arrives in New Orleans atmosphere as a tormented and desperate woman seeking help from her sister and brother-in-law. In the beginning she speaks and dresses as a refined, sophisticated and conservative women from the south but we soon see the frayed nerves thought her. ...read more.

He stuck a revolver into his mouth and fired. It was because, on the dance floor, unable to stop myself I said - 'you're weak! I've lost respect for you! I despise you!" William uses the polka dance song in this scene that replays in Blanches mind that is a symbol of Blanche and her past. The Varsouviana is a classical waltz, which is show high class 'we danced the Varsouviana!' Blanche has been extremely traumatised by this event. Blanche then on in life experience many deaths. There had been her father, mother, Jessie, Margaret and then Allan. Which then bring us to the stage when she lost Belle Reve and the part Stella play. Stella had a part to play in blanches downfall form the very beginning. Blanche was indebt at Belle Reve. Herself carrying the entire burden descended her on her shoulder. Belle Reve was lost because of the expenses made for the funnels. Blanche was lost in her own world when she describes Belle Reve; Stella describes it as a hysterical outburst. Blanche blames Stella for losing belle Reve because her leave. 'But you are the one that abandoned Belle Reve, not I! I stayed and fought for it, bled for it, also die for it.' The technical skill used is sound and colours are added to the scene. The music of the blue piano grows louder. ...read more.

she fearfully notices his strange appearance and finds him to be an unrepentant suitor: Oh, my, my, what a cold shoulder. And what uncouth apparel! Why, you haven't even shaved! The polka tune starts up in Blanche's mentally-disturbed head Stanley takes extreme offense at Blanche's denigration of his ethnic nationality: "I am not a Pollack. People from Poland are Poles. They are not Pollacks. But what I am is one hundred percent American. I'm born and raised in the greatest country on this earth and I'm proud of it. And don't you ever call me a Pollack!" Cruelly, he presents Blanche with a "little birthday remembrance," a Greyhound bus ticket back to where she came from: "That's a ticket back to Laurel on the bus. Tuesday." Stanley believes that sister-in-law Blanche has upset their good times since her arrival. He remembers back to earlier good times before she arrived and deceptively told them of the majestic Belle Reve and its columns: Listen, baby, when we first met - you and me - you thought I was common. Well, how right you was! I was common as dirt. You showed me a snapshot of the place with them columns, and I pulled you down off them columns, and you loved it, having them colored lights goin'! And wasn't we happy together? Wasn't it all okay till she showed here? And wasn't we happy together? Wasn't it all OK? Till she showed here. Hoity-toity, describin' me like an ape. Suddenly going into labor, Stella asks to be taken to the hospital to have her baby delivered ...read more.