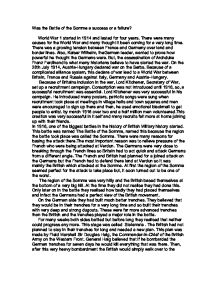 Was the Battle of the Somme a success or a failure?

Was the Battle of the Somme a success or a failure? World War 1 started in 1914 and lasted for four years. There were many causes for the World War and many thought it been coming for a very long time. There was a growing tension between France and Germany over land and border lines. Also, Kaiser Wilhelm, theGerman leader, wanted to prove how powerful he thought the Germans were. But, the assassination of Archduke Franz Ferdinand is what many historians believe to have started the war. On the 28th July 1914, Austria-Hungary declared war on the Serbs. Because of a complicated alliance system, this declare of war lead to a World War between Britain, France and Russia against Italy, Germany and Austria-Hungary. Because of Britains inclusion in the war, Lord KItchener, Secretary of War, set up a recruitment campaign. Conscription was not introduced until 1916, so, a successful recruitment was essential. Lord Kitchener was very successful in his campaign. He introduced many posters, patriotic songs were sung when recruitment took place at meetings in village halls and town squares and men were encouraged to sign up there and then, he used emotional blackmail to get people to enlist. by march 1916 over two and a half million men volunteered.This creation was very successful in it self and many recruits felt more at home joining up with their friends. ...read more.

Many people were not to sure about Haigs plan including his right hand man General Rawlinson. Russell Bradshaw, 11th East Lancashire Regiment (the Accrington Pals ) complains about the standard instructions to cross no mans land at walking pace. This proves that many had doubts about the orders of the plan. But, even with such important people doubting him he stuck to his plan. On the 1st July, 1916 the battle began. All of the British troops had been ordered to walk over no mans land. The British troops had a very big shock indeed because, as soon as they walked over the top of their trenches German machine guns fired at them. When we started firing we just had to load and reload. They went down in their hundreds. You didnt even have to aim, we just fired into them, This source has came from a German machine-gunner at the Somme. It doesnt tell us when he said it so this could have affected his interpretation on the event. It also doesnt tell us his name or his background and this too could affect his interpretation. But it clearly tells us the failure of Haigs plan. General Rees, commander of the 94th Infantry Brigade was also at the Somme the day the battle started. ...read more.

The allied forces had advanced along a thirty-mile strip that was seven miles deep at its maximum. Many people find it hard to believe that nearly 88,000 allied men died for every one mile gained. Many people have argued that the Battle of the Somme was a success or a failure. They are many reasons why they would argue that. One of the reasons why people would think it was a success was because that the British achieved their first objective which was to relieve pressure of the French who were being attacked at Verdun. The British attack at Somme did this and prevented what could have been a breakthrough for the Germans. On the other side people have said that Haigs plan was all wrong and the losses during the battle should not have happened. Many people have Haig souly to blame for the losses and his stubbornness to change his plan. But when you think about it, there had never been a battle or war like that. He can be let of for not really knowing how to handle the battle. But he can not be excused from the fact that his plans were not changed although many doubted it. I believe that the Battle of the Somme was a success. Although, thousands and thousands lost their lives fighting for their countries, the loss taught the British lessons. Without these lessons they might not have won the war. ...read more.