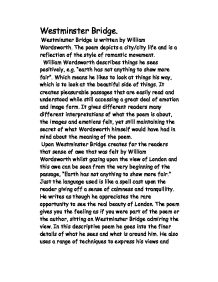 Westminster Bridge. Westminster Bridge is written by William Wordsworth. The poem depicts a city/city life and is a reflection of the style of romantic movement. William Wordsworth describes things he sees positively, e.g. "earth has not anything to show more fair". Which means he likes to look at things his way, which is to look at the beautiful side of things. It creates pleasurable passages that are easily read and understood while still accessing a great deal of emotion and image form. It gives different readers many different interpretations of what the poem is about, the images and emotions felt, yet still maintaining the secret of what Wordsworth himself would have had in mind about the meaning of the poem. Upon Westminster Bridge creates for the readers that sense of awe that was felt by William Wordsworth whilst gazing upon the view of London and this awe can be seen from the very beginning of the passage, "Earth has not anything to show more fair." Just the language used is like a spell cast upon the reader giving off a sense of calmness and tranquillity. ...read more.

Wordsworth continues onto the next line, represents trade; "Ships, towers, domes, theatres and temples lie". There's a lot of entertainment going on there, where London was untouched before industrial revolution, just when everything was pure. On the next line anything can go on there, it's a big city that it is free and wild. He is tells us the city is clean, there is no pollution and associates it with natural things. Also when you read it in your mind you are filled with a joyful and happy feeling, as it feels pure because of how he explains the poem. All through the poem you realize he is treating the Earth as something precious, only looks at the good things, before anyone touched the world, where there was no such thing as pollution or huge cities or houses. On the next line he says; "Never did sun more, beautifully steep". Which personifies the sun, never shone more beautifully and sun doesn't shine on anything. In the next line he says in London from what he can see there are natural things; "In his first splendour, valley, rock, or hill." ...read more.

The poem starts with; "The winter evening settles down" - as soon as you read it you picture the poem as being miserable throughout. Compared with the previous poem, Westminster Bridge starts with calmness and tranquillity, showing the beauty of the poem, so from the beginning you know the poems are not going to be alike. Throughout the second poem his words are described as a more depressing and bleak view, where Westminster Bridge displays a more vibrant and colourful vocabulary. Also in Prelude the writing is more random and has a lack of punctuation, which means there are no endings to his sentences. The poem I prefer is Westminster Bridge as it is full of excellent imagery creating an optimistic tone and view of London. It also gives a beautiful theme throughout the poem which makes it pleasant to read, and I like the way he talks about London when he says the nature and beauty of it, as if anything can be achieved there. Just the first line reflects this; " Earth has not anything to show more fair:" It has a certain calmness about it from the very beginning, and you already want to read on. I think this line works really well, because from the very beginning it traps you to make you want to continue. ...read more.