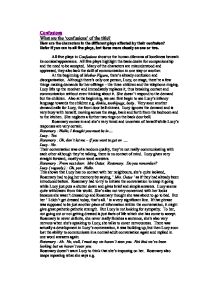 Confusions What are the 'confusions' of the title? How are the characters in the different plays affected by their confusion? Refer if you can to all five plays, but focus more closely on one or two. All five plays in Confusions show us the human dilemma of loneliness beneath its comical appearance. All five plays highlight the basic desire for companionship and the need to be accepted. Many of the characters are misunderstood and oppressed, they also lack the skill of communication in one way or another. At the beginning of Mother Figure, there's already confusion and disorganisation. Although there's only one person, Lucy, on stage, there're a few things making demands for her offstage - the three children and the telephone ringing. Lucy lifts up the receiver and immediately replaces it, thus breaking contact and communication without even thinking about it. She doesn't respond to the demand but the children. Also at the beginning, we can first begin to see Lucy's infancy language towards the children e.g. dinkie, toothipegs, botty. Very soon another demand calls for Lucy, the front door bell chimes. Lucy ignores the demand and is very busy with herself, moving across the stage, back and forth from the bedroom and to the kitchen. ...read more.

Rosemary is very much controlled by Terry, she likes to be bossed around, partly because she's always not decisive enough. Terry was surprised at Rosemary drinking orange juice but Rosemary was sticking up for Lucy. Lucy was very formal in treating Terry, she had Terry call her ' Mrs.Compton'. She patronised Terry for being polite for calling her back ' Mrs.Compton'. Terry has started to accepted the rules that Lucy has laid on and corrects what he was going to say : Terry : And what about Har - Mr Compton? Terry tries to be humorous but is rather unsuccessful when he talked about men should be going out where women should be staying at home. This led to Rosemary and Terry quarrelling, and we can begin to see the tension between their relationship. All those feelings that were suppressed was released. They're actually confused with each other, they don't know what each other really wants. Rosemary thinks that Terry is always staying at home relaxing while Terry thinks that Rosemary is happy enough staying at home. We can see Terry's male chauvinism coming out. We, as observers actually sense a feeling of childish-like quality in this bickering. Terry made excuses to go because he was afraid to stay, but Rosemary, like a little child was telling tales. ...read more.

His life is in a state of confusion, especially since his wife's death, even his business is in financial ruin. Beryl has a problem of not listening to advice even when she seeks it, her mind is already made up. Hers' is a self-enforced loneliness because she lacks the courage to act positively and stand up to her violent boyfriend. Ernest seems to be the one who should be happy, yet he can't stand being at home. He'd rather run than to face the problems. Out of all five characters in this play, it seems that only Ernest is unhappy, the others don't feel unhappy, but we, as an outsider have ' double vision' and so we know that the other characters are sad. They all lead quite sad lives in fact. Ernest doesn't talk very pleasantly about his wife. ' I look at her some mornings and I think, blimey, I must have won last prize in a raffle.' That's bitter humour. In Ernest's household, his communication between has wife has just come down to arguments. The final line, ' might as well talk to yourself ' says it all. I think we as audience, after seeing/reading A Talk In The Park will see how we have probably ignored those around us who needed to be listened to. Their loneliness is a cry for help. Sometimes we're too busy thinking about ourselves that we completely ignore other people. ...read more.