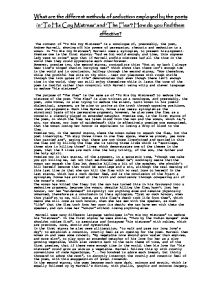 What are the different methods of seduction employed by the poets in 'To His Coy Mistress' and 'The Flea'? How do you find them effective?

What are the different methods of seduction employed by the poets in 'To His Coy Mistress' and 'The Flea'? How do you find them effective? The content of "To His Coy Mistress" is a monologue of, presumably, the poet, Andrew Marvell, showing off his powers of persuasion, rhetoric and seduction to a woman. In "To His Coy Mistress", Marvell uses a syllogism, to present his argument. Premise one is the first stanza; "had we but world enough, and time, this coyness lady were no crime" says that if Marvell and his mistress had all the time in the world then they could appreciate each other forever. However, premise two, the second stanza, contradicts this; "But at my back I always hear time's winged chariot hurrying near" which shows that there isn't enough time in the world and in conclusion, halfway through the second stanza, "Now therefore, while the youthful hue sits on thy skin...tear our pleasures with rough strife through the iron gates of life" demonstrates that even though there isn't enough time in the world, they can still enjoy themselves while it lasts. The tone of the poem is lustful rather than romantic; with Marvell using witty and clever language to seduce "his mistress". The purpose of "The Flea" is the same as of "To His Coy Mistress"; to seduce the mistress of the poet. "The Flea" is also written as a monologue, and presumably, the poet, John Donne, is also trying to seduce the silent, tacit woman in his poetic dialectical, argument, as he aims to arrive at the truth through opposing positions, views and arguments. ...read more.

In the second stanza, the poem becomes much more dark, ominous and erotic, which is equally followed up by Marvell's diction, with phallic, graphic and ominous imagery, "...Then worms shall try that long preserved virginity, and your quaint honour turn to dust, and into ashes all my lust"; this quote, as a reprise, comes back almost hauntingly to the idea of death and of the premise that time is running out and all of her beauty will pass away; that it is transient and ephemeral. Marvell demonstrates irony; "The grave's a fine and private place, but none, I think, do there embrace"; a sarcastic comment to mock "his mistress" about the fact that her grave is a place for herself and the speaker remains doubtful whether she'll actually be able to have sex in there when she's dead. Finally, Marvell finishes off the poem with personification, "Rather at once our time devour than languish in his slow-chapt power", personifying time itself as slow-moving, chewing, eating and devouring. The message Marvell is conveying in this quotation is carpe diem; seize the day, that he and "his mistress" should be the masters of time; that they should devour it, like "amorous birds of pray". The iambic tetrameter in "To His Coy Mistress" lends the poem momentum and pace and also relates to the theme of the poem, time and mortality; because the metre is structurally reminiscent of the sound of time ticking away; "And yonder all before us lie". ...read more.

almost loosens the structure of the poem and lets it flow on the tongue, as it is read, unlike in "To His Coy Mistress". At the same time, the last three rhyming triplets act as a 'punch-line' to finish off each stanza. There are not many examples of enjambment, caesurae or end-stopping that can be found in the text, "this flea is you and I, and this our marriage bed, and marriage temple is" this is mainly because Donne tries to keep this loose and light feel that almost seems to role on the tongue, unlike in "To His Coy Mistress", where this extensive use of the skills gives the poem a blocky, intense and an anticipating feel. In conclusion, when accessing the effectiveness of each of the poems, in terms of content, form and the language that is used, I feel that both poems are very effective in what they set out to achieve, even though the two poems may differ in certain aspects from each other, for example how Marvell's has a much darker, lustful and erotic tone, and focuses around the theme of time in comparison with Donne's which has a much gentler and lighter touch and how he uses the flea as a conceit of their love and of his persistence. However, fundamentally both set out to achieve the same thing, which is to seduce the woman with each poets own unique skills of rhetoric; and I think that both poets fulfil their aims, and therefore that both the ladies would succumb to these irrefutable pieces of poetic argument. Stefan Lazic ...read more.