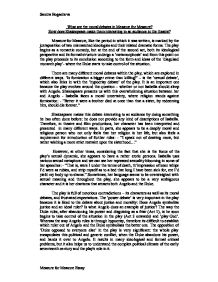 What are the moral debates in Measure for Measure? How does Shakespeare make them interesting to an audience in the theatre?

What are the moral debates in Measure for Measure? How does Shakespeare make them interesting to an audience in the theatre? Measure for Measure, like the period in which it was written, is marked by the juxtaposition of two mismatched ideologies and their related dramatic forms. The play begins as a romantic comedy, but at the end of the second act, both its ideological perspective and its formal structure undergo a 'metamorphosis' and from this point on the play proceeds to its conclusion according to the form and ideas of the 'disguised monarch play'- where the Duke starts to take control of the situation. There are many different moral debates within the play, which are explored in different ways. 'Is fornication a bigger crime than killing?' - is the 's****l debate', which also links in with the 'hypocrisy debate' of the play. It is an important one because the play evolves around the question - whether or not Isabella should sleep with Angelo. Shakespeare presents us with this overwhelming situation between her and Angelo - Isabella faces a moral uncertainty, where religion stands against fornication: - "Better it were a brother died at once than that a sister, by redeeming him, should die forever." ...read more.

and 'play God'. Whereas the way Angelo rules is through hypocrisy, therefore its difficult to establish which ruler out of Angelo and the Duke symbolises the better one. The opposition of 'Duke opposed to everyone else' in the play is very significant: the whole play encapsulates this political and generic conflict, when the Duke abandons his power, and hands it over to Angelo. It results in many ideological and formal critical problems, but it also helps us to understand the complex political climate of the early seventeenth century and the play's role in it. In 1603-1604, the likely years of Measure for Measure's was written, England after years of anticipation and anxiety finally saw the accession of its new king: James I. The changeover from Elizabeth to James I was peaceful, and for most people it was something they greeted with enthusiasm coming from a sense of relief. One of James' acts as a monarch was disguising himself and leaving his throne in order to go and live amongst British citizens. He condemned people to death and then as he would 'come back', he would release them and therefore gain great support and reputation. ...read more.

Shakespeare tries to raise a number of different topical, moral debates in Measure for Measure through a variety of techniques such as comedy, language, structure, and the using relevant historical influences - king James I. The importance of understanding the play, especially its moral debate on the theory of judgment, is suggested by the Biblical source of the play's title: "Judge not, that ye be not judged. For with what judgement ye judge, ye shal be judged, and with what measure ye mette, it shal be measured to you againe" (Geneva Bible, Matthew 7:1-2). As the other characters see it, Angelo's legal inflexibility towards Claudio and his romantic insensitivity towards Isabella are linked by his lack of empathy. In explaining Angelo's strict application of the law against fornication, Lucio characterizes Angelo as: - "A man whose blood is very snowbroth; one who never feels the wanton stings and motions of the sense..." (Act 1, scene 4). The way Shakespeare concludes his play would be interesting to the audience because it concludes with a comical ending and leaves us thinking about the generic movement towards marriage at the time, which is connected thematically by the debate on empathy, mercy and justice. Sandra Bogacheva Measure for Measure Essay ...read more.