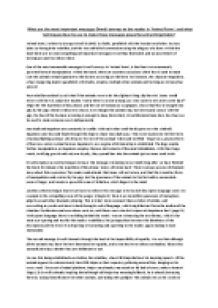 What are the most important messages Orwell conveys to the reader in Animal Farm, and what techniques does he use to make these messages powerful and unforgettable?

﻿What are the most important messages Orwell conveys to the reader in ?Animal Farm?, and what techniques does he use to make these messages powerful and unforgettable? Animal Farm, (written by George Orwell in 1945) is a fable, paralleled with the Russian revolution. Its story takes us through the rebellion, and the rise and fall of communism using the allegory of a farm. Within the book there are several compelling and important messages Orwell has illustrated, and an assortment of techniques used to enforce them. One of the most memorable messages Orwell conveys in ?Animal Farm?, is that fear is an enormously powerful form of manipulation. Within the book, there are countless occasions where fear is used to make sure the animals remain ignorant to the horrors occurring on the farm. For instance, the character Napoleon, a fear mongering leader (paralleled with Stalin), employs multiple other animals and techniques to keep fear present. Post-rebellion outlook is such that if the animals were to let the slightest thing slip then Mr. Jones would return with his evil, subjective regime. 'Surely there is no one among you who wants to see Jones come back?' (Page 39) The repetition of this phrase, and the use of humans as scapegoats, shows that fear is brought into play by the pigs whenever dissent is shown. Even though the animals may not necessarily concur with the pigs, the fear of the humans returning is enough to keep them silent. ...read more.

Throughout the novel Orwell shows how inequality transcends Animal Farm, by gradually developing the differences between the animals. The pigs, although they do not start out as the leaders, with their exceptional intelligence begin to dominate the running of the farm. Had all the animals been equal the pigs would never have obtained this position if superiority. There are several other blatant examples of injustice like this throughout the course of the book, which the other animals are too ignorant to notice. The pigs get all the apples and milk despite doing little physical work; they get to rest or ?supervise? whilst the other animals perform back breaking labour. All the animals have different abilities, and they are not and cannot be equals. Orwell uses a diverse range of techniques to enforce this message in the novel. One that is particularly memorable to the reader is the ironic tone in the narrator?s voice.? It was noticed that they were especially liable to break into "Four legs good, two legs bad" at crucial moments in Snowball's speeches? (page 50). The reader enjoys understanding the sarcasm and deciphering the language used by the narrator. The dramatic irony however is very aggravating to the reader and can border on stressful and upsetting at times, for instance, when Boxer is taken away to the slaughterhouse.? The animals crowded round the van ?Goodbye Boxer? they chorused? (page 104). ...read more.

The messages in the book, though it was written over 50 years ago, are growing more and more relevant. Though the book was directly paralleled with the rise and fall of Communism in the USSR, there is an overwhelming resemblance of Animal Farm to current affairs as well. Dictatorships continue to exist across the globe, and the rise to power of a dictator can be compared to that of Napoleon. For instance, in the Arab Spring (2013) the people over threw their tyrannical dictators, in hope of better treatment of the working classes. In spite of having one purpose in mind during the first days of the revolution, the Arab parties have competed for leadership in the same way as Napoleon and Snowball did when they set to build the windmill. Despite the best intentions, the Arab nations have jumped out of the frying pan and into the fire. The situation has worsened, and there is now more poverty and civil disarray than ever. Even whilst the nations were in a state of flux there have been single parties creeping into power. Their ideals were corrupted by power and they became the people they hate, just like in Animal Farm. The fact Animal Farm is an allegorical fable, makes it more accessible, and applicable to recent events. It is as relevant today as it ever was. The novel conveys the fact that inequality will always be present; there will always be ignorant people who blindly follow immoral causes, just as there will always be those who manipulate those around them. ...read more.