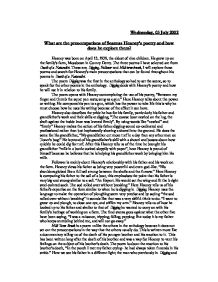 What are the preoccupations of Seamus Heaney&amp;#146;s poetry and how does he explore them?

Wednesday, 03 July 2002 What are the preoccupations of Seamus Heaney's poetry and how does he explore them? Heaney was born on April 13, 1939, the eldest of nine children. He grew up on the family's farm, Mossbawn in County Derry. The three poems I have selected are from Death of a Naturalist. These are; Digging, Follower and Mid-term break, I will explore these poems and search for Heaney's main preoccupations that can be found throughout his poems in Death of a Naturalist. The poem Digging was the first in the anthology so had to set the scene, so to speak for the other poems in the anthology. Digging deals with Heaney's poetry and how he will use it in relation to his family. The poem opens with Heaney contemplating the use of his poetry, "Between my finger and thumb the squat pen rests; snug as a gun." Here Heaney talks about the power or writing. He compares his pen to a gun, which has the power to take life this is why he must choose how he uses his writing because of the effect it can have. Heaney also describes the pride he has for his family, particularly his father and grandfather's work and their skills at digging, "The coarse boot nestled on the lug, the shaft against the inside knee was levered firmly". By using words like "nestled" and "firmly" Heaney makes the action of his father digging sound co-ordinated and professional rather than just haphazardly shoving a shovel into the ground. He does the same for his grandfather, "My grandfather cut more turf in a day than any other man on Toner's bog." He is proud of his grandfather's skill with a shovel and boasts about how quickly he could dig for turf. After this Heaney tells us of the time he brought his grandfather "milk in a bottle corked sloppily with paper", hear Heaney is proud of himself because he believes that he is helping his grandfather work by bringing him his milk. ...read more.

In Follower in the first five stanzas Heaney has told us of how great his father was and even makes him sound like a god but in the final stanza Heaney tells us how things have changed and that it is now his father who is looking for recognition from him and trying to help but inevitably getting in the way. This is similar to the ending of Digging where there is a turning point and Heaney tells us of how things have changed whether it is his family's role in the workplace or his father's role towards him as an idol. In Mid-term break Heaney has to deal with the death of his younger brother, dealing with death itself is a part of growing up but for Heaney it is different, he is the eldest and has responsibilities to act as a pillar towards the whole family and help them get over the difficult time. "Old men standing up to shake my hand" and "whispers informed strangers that I was the eldest." At this point he realises his responsibilities of being the eldest and that he must now grow up. "My mother held my hand in hers"; here the young Heaney acts as a pillar of strength for his mother, another aspect of growing up. In every poem in the anthology there is a turning point, a moment of realisation at the end of each poem where Heaney decides the way he will go or how he will deal with a new aspect of life. In Digging it can be seen very distinctly, he finishes the poem with almost the same line he started it with, this way we can see the problem clearly as well as the answer to it. "Between my finger and my thumb the squat pen rest; snug as a gun" Heaney starts off with the problem that he does not know how he will use his poetry, he must be careful with it because it is a powerful thing that is why he refers to his pen as a gun. ...read more.

Heaney has a very unique way of setting out the stanza, he makes brakes in the middle of sentences to emphasise points and put across the informal atmosphere that he also does by using language. Heaney likes to break up stanza in unexpected places to give freedom to his writing and show that he is not conforming to a certain form of writing poetry. He also does this to put forward the informal conversational tone, for example in Mid-Term break he breaks the stanza up so it looks like a conversation and that he is telling us about the event of his brother's death. He also does it to emphasise points; "...My father, digging. I look down Till his straining rump among the flowerbeds Bends low, comes up twenty years later..." Here Heaney stops the stanza in the middle of a sentence to put emphasise on "I look down" so that as he looks down so does the reader, this helps to involve the reader in the poem and helps with the more personal informal tone of the poem. In conclusion, Heaney's main preoccupations are; his relationship with his family, particularly his father, growing up and becoming a responsible man who chooses the right things over what he would rather to do, the countryside and the childhood he spent there with his family, and turning point are very important in his poetry because that is how he has decided to use his poetry; to find out more about himself and make decisions about his life. Heaney explores these preoccupations with the richness of his language. He uses words that help the reader to put themselves in Heaney's experiences and to feel what Heaney feels. The senses are very important in Heaney's writing and by using the language the way he does he evokes the senses and puts them into action just by using language. Heaney explores his preoccupations by manipulating the language to the point where the reader feels he or she is Heaney and has felt the things Heaney has felt. ...read more.