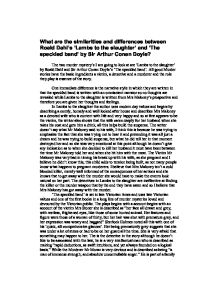 What are the similarities and differences between Roald Dahl's 'Lambs to the slaughter' and 'The speckled band' by Sir Arthur Conan Doyle? The two murder mystery's I am going to look at are 'Lambs to the slaughter' by Roald Dahl and Sir Arthur Conan Doyle's 'The speckled band'. All good Murder stories have the basic ingredients a victim, a detective and a murderer and the role they play is essence of the story. One immediate difference is the narrative style in which they are written in that the speckled band is written with an omniscient narrator so no thoughts are revealed while Lambs to the slaughter is written from Mrs Maloney's prospective and therefore you are given her thoughts and feelings. ...read more.

she was very emotional at this point although he doesn't give any indication as to when she decided to kill her husband it must have been between the time Mr Maloney told her and when she hit him with the meat. The Victim Mr Maloney was very bad in timing his break up with his wife, as she pregnant and I believe he didn't know this, this child adds to tension being built, as not many people know what happens to pregnant murderers. I believe that Mrs Maloney isn't a cold blooded killer, merely well informed of the consequences of her actions and she knows that to get away with the murder she would have to make the events look natural on her part. ...read more.

Her being prematurely grey suggests that she was under a lot of stress or had to be on her guard all the time. She is very afraid that something may happen to her. The is the detective in the story although he doesn't like to be associated with the law, he is a very intellectual man who is described as making "rapid deductions, as swift intuitions, and yet always founded on a logical basis." While the Murderer Mr Moran is very devious and is described as being "a man of immense strength, and absolute uncontrollable anger." He is part of a family that through a succession of ' a dissolute and wasteful deposition,' wasted the family fortune ...read more.