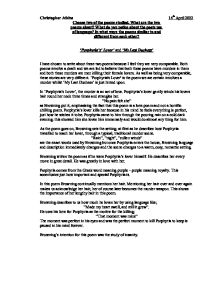 What are the two poems about? What do you notice about the poets use of language? In what ways the poems similar to and different from each other? 'Porphyria's' Lover'and 'My Last Duchess'.

Christopher Atkins 14th April 2002 Choose two of the poems studied. What are the two poems about? What do you notice about the poets use of language? In what ways the poems similar to and different from each other? 'Porphyria's' Lover' and 'My Last Duchess' I have chosen to write about these two poems because I feel they are very comparable. Both poems involve a death and we are led to believe that both these poems have murders in them and both these murders are men killing their female lovers. As well as being very comparable, these stories are very different. ...read more.

Porphyria's lover kills her because in his mind he feels everything is perfect, just how he wishes it to be. Porphyria came to him through the pouring rain on a cold dark evening; this showed him she loves him immensely and would do almost any thing for him. As the poem goes on, Browning sets the setting; at first as he describes how Porphyria travelled to reach her lover, through a typical, traditional murder scene. "Rain", "night", "sullen winds" are the exact words used by Browning but once Porphyria enters the house, Browning language and description immediately changes and the scene changes to a warm, cosy, romantic setting. ...read more.

Mentioning her hair over and over again makes us acknowledge her hair, her of course later becomes the murder weapon. This shows the importance of her lengthy hair in this poem. Browning describes to us how much he loves her by using language like; "Made my heart swell, and still it grew". He uses his love for Porphyria as the motive for the killing; "That moment was mine" The moment was perfect in his eyes and was the perfect moment to kill Porphyria to keep is paused in his mind forever. Browning's intention for this poem was the study of insanity. ...read more.