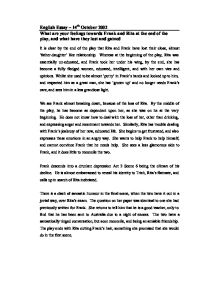 What are your feelings towards Frank and Rita at the end of the play, and what have they lost and gained

English Essay - 14th October 2002 What are your feelings towards Frank and Rita at the end of the play, and what have they lost and gained It is clear by the end of the play that Rita and Frank have lost their close, almost 'father-daughter' like relationship. Whereas at the beginning of the play, Rita was essentially un-educated, and Frank took her under his wing, by the end, she has become a fully fledged women, educated, intelligent, and with her own vies and opinions. ...read more.

By the middle of the play, he has become as dependent upon her, as she was on he at the very beginning. He does not know how to deal with the loss of her, other than drinking, and expressing anger and resentment towards her. Similarly, Rita has trouble dealing with Frank's jealousy of her new, educated life. She begins to get frustrated, and also expresses these emotions in an angry way. ...read more.

There is a clash of sarcastic humour in the final scene, when the two have it out in a jovial way, over Rita's exam. The question on her paper was identical to one she had previously written for Frank. She returns to tell him that he is a good teacher, only to find that he has been sent to Australia due to a night of excess. The two have a sarcastically tinged conversation, but soon reconcile, and being an amiable friendship. The play ends with Rita cutting Frank's hair, something she promised that she would do in the first scene. ...read more.