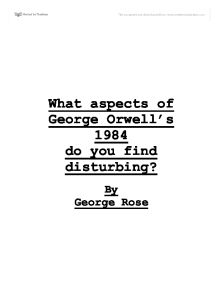 What aspects of George Orwell's 1984 do you find disturbing? By George Rose What aspects of George Orwell's '1984' do you find disturbing? 1984 was written as a satire of the political-fiction of the times. Orwell's disgust in the movements of Russia forced him to express his feelings in both the book of 'Animal Farm' and the later book '1984'. In '1984' Orwell aimed to annotate the situation in Russia through the life of Winston Smith, a rebellious citizen of Big Brother's Oceania. Throughout the book Orwell has added ideas, which today could be seen as disturbing and would be unthought of in today's world of morals, and political freedom. Today, when a political party is thought of as successful and progressive, it is taken for granted that with this comes a state of peace, freedom and good living. This is by no means so in Big Brother's Empire. In Oceania there is constant war, everlasting slavery and total ignorance of the people. These three ideas are portrayed in the first few pages of the book, when the party's three slogans are revealed WAR IS PEACE FREEDOM IS SLAVERY IGNORANCE IS STRENGTH Yet how is it possible for these three morals, which totally contradict themselves, to be used as a basis for society? ...read more.

Only the thought police mattered". Although every flat in every tower block was equipped with an all-seeing and all-listening telescreen, there was one further threat of surveillance - the Spies. As much so as boys today may attend scout groups or girls may participate in the girl guides, it was a mandatory duty for all school children of Oceania, who were not proles, to attend the Spies. Dressed in their blue shorts, grey shirts and red neckerchiefs these young spies fell nothing short of looking as if they were a western cowboy, and with their tracking ears and armed with catapults and stones, the children were a great threat to any "thought criminal". During his stay within the Ministry of Love (or 'Miniluv') Winston had a final conversation with a close friend of his, Mr Parsons, father to two members of the Spies. During this conversation he soon discovered how the thought police had caught Parsons. Although he was ashamed of his actions against the party, Parsons was still able to hold his head up high and announce that "It was my little daughter...She listened at the key hole...nipped off to the patrols the next day...In fact I'm proud of her". ...read more.

I find this so astonishing and disturbing that while we today are urged to express feelings freely and truthfully whereas in the Utopian world of George Orwell's Oceania, it was a sin to do so. To the onlooker of George Orwell's world it seems incredible how anyone could be able to live like millions did within the book, and I too have similar feelings. Yet I would by no means outride Airstrip one for being a place within which a human could be able to live their life happily without worries. A child born in the city of London in '1984' would be unconscious to any political controversy and would be brought up thinking that the respect and love for Big Brother was a normal occurrence, and he would not be wrong in thinking so. For once an alternative way of ruling has been devised and set-up any one within the system any newborn baby (or born-again Big Brother worshiper) would be unaware of such atrocious doings of the Party. And as stated on the third page of the book "Ignorance is Strength", the ignorance of a child to the regime of Big Brother will only make him stronger, and the ignorance of the people to the Party's action will also make the Party stronger. ...read more.