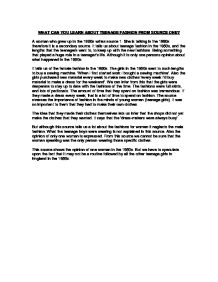 What can you learn about teenage fashion from source one?

WHAT CAN YOU LEARN ABOUT TEENAGE FASHION FROM SOURCE ONE? A woman who grew up in the 1950s writes source 1. She is talking in the 1980s therefore it is a secondary source. It tells us about teenage fashion in the 1950s, and the lengths that the teenagers went to, to keep up with the new fashions. Being something that played a huge role in a teenager's life. Although it is only one persons opinion about what happened in the 1950s. It tells us of the female fashion in the 1950s. The girls in the 1950s went to such lengths to buy a sewing machine. 'When I first started work I bought a sewing machine'. Also the girls purchased new material every week to make new clothes 'every week I'd buy material to make a dress for the weekend'. We can infer from this that the girls were desperate to stay up to date with the fashions of the time. The fashions were full skirts, and lots of petticoats. The amount of time that they spent on fashion was tremendous. If they made a dress every week, that is a lot of time to spend on fashion. The source stresses the importance of fashion in the minds of young women (teenage girls). It was so important to them that they had to make their own clothes. The idea that they made their clothes themselves lets us infer that the shops did not yet make the clothes that they wanted. It says that the 'dress-makers were always busy'. But although this source tells us a lot about the fashions for women it neglects the male fashion. What the teenage boys were wearing is not explained in this source. Also the opinion of only one woman is expressed. From this source we cannot be sure that the woman speaking was the only person wearing those specific clothes. ...read more.

This source is quite valuable to find out the impact of youth culture. Where source 5 spoke of clothes and slang it did not talk of the money that the youth had. Source 6 says that the youths, or 'teddy children', were 'highly solvent'. We can infer from this that the youths had plenty of ready cash for their disposable. In conclusion as good as these sources may be they have their limitations. Sources 5 & 6 both neglect the music business. This is bad because music plays a vital part in a teenager's life. They both talk mostly about fashion mostly. Judging from these two sources one might say that fashion was the only thing in a teenagers life. This is not true as music and other factors play a vital role in a teenagers' life. Source 5 is useful in telling us about the money and teenage culture. But what they both do not tell us about the effect on society that teenagers had. HOW CAN SOURCES 4 5 6 & 7 BE USED TO HELP EXPLAIN WHY ADULTS SOMETIMES FOUND TEENAGERS DIFFICULT TO UNDERSTAND? Source 4 is from a book ENGLAND, HALF ENGLISH by Colin Mcinnes, it is written in 1961. Source 5 is taken also from a book A HISTORY OF POST WAR BRITAIN by Peter Lane written in 1971, it is a secondary source. Source 6 is from an article in the times newspaper, on the date 12 may 1956. Source 7 is taken from another newspaper, a local newspaper, the Daily Dispatch, from the date 15 October 1954. The children in the 1950s were more privileged than their parents. In that the parents grew up during both the wars and in the 30s and the 40s where the children had no prospects, no job, and no money. During the war there was rationing and hardship. There was and still is a generation gap between the parents and their children. ...read more.

'Tremendously vigorous culture', we can infer from this that the teenage culture was very vibrant and a new and fresh thing that the adults had trouble understanding. They had a 'strong sense of corporate identity'; this shows that teenagers had businesses trying hard to make new products aimed specifically at teenagers. Source 7 is about music and how it affects teenagers in the 50s. It is not very useful in telling us about why teenage culture emerged. Although it does talk a lot about music, it says a 'crowd of idol worshippers', we can infer from this that the audience was loving everything that the artist, Laine, did, his words, his movements etc. this source shows the amount of bewilderment that adults had for a scene like this. It says 'the adulation of this man bewilders me'. The reporter is shocked and astounded by what he/she sees. This source tells us not about why teenage culture emerged. Source 8 tells us about the type of music that the teenagers listened to. But again not why teenage culture emerged. This source is taken from a book by CAR Hills, 'growing up in great Britain in the 1950s', written in 1983. It is therefore a secondary source. This source tells us that there were a lot of pop singers. 'Legions of young pop singers', we can infer from this that lots of people had decided to make some money out of these youths, who now have money to spend, upon non-essential goods. They had probably realised that music was important to the youths. In conclusion the reason that teenage culture emerged was because of the economic boom that happened in this country in 1950s. Because the youths had some money to spare they decided to spend it on recreational items and products that they wanted to purchase. If they had been under the obligations of their parents, who had to look after more than just themselves the teenage culture would probably not have emerged. By Sandeep Bahra 11M1 Ms Hay ...read more.