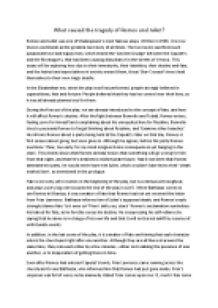 What caused the tragedy of Romeo and Juliet?

﻿What caused the tragedy of Romeo and Juliet? Romeo and Juliet was one of Shakespeare?s most famous plays. Written in 1596, it is now known worldwide as the greatest love story of all times. The two lovers sacrificed such passionate love and happy lives, which ended the ?Ancient Grudge? between the Capulet?s and the Montague?s, that had been causing disturbance in the streets of Verona. This essay will be exploring how due to their immaturity, their identities, their destiny and fate, and the hatred and expectations in society around them, these ?Star-Crossed? lovers lead themselves to their own tragic deaths. In the Elizabethan era, when the play was first performed, people strongly believed in superstitions, fate and fortune. People believed that they had no control over their lives, as it was all already planned out for them. During the first act of the play, we are already introduced to the concept of fate, and how it will affect Romeo?s destiny. After the fight between Benvolio and Tybalt, Romeo enters, feeling sorry for himself and complaining about his unrequited love for Rosaline. Benvolio tries to persuade Romeo to forget thinking about Rosaline, and ?Examine other beauties?. He informs Romeo about a party being held at the Capulet?s later on that day. ...read more.

Right at the beginning of the play, in Act One, when Romeo and Juliet first meet, Romeo asks the Nurse about Juliet?s identity. When he finds out that Juliet is a Capulet, Romeo cries ?Oh dear account! My life is my foe?s debt!? We can tell that he already feels that he cannot live without her and he knows that there would be a heavy price to pay for this love to live. On the basis that Romeo decides to go on with this love, it shows us just how passionate and desirous this love actually is. In a similar way, when Juliet finds out that Romeo is a Montague, her reaction is no better, ?My only love sprung from my only hate!? Juliet realises that it is now too late to do anything as she is already deeply in love with Romeo. She is shocked at the idea that she has fallen so profoundly in love with her enemy?s son, but like Romeo ? she figures to carry on. There are many other reasons for the death of Romeo and Juliet, one of the most prominent being their immaturity. Many people question the love between Rome and Juliet to be rushed or false, leading to hasty and fatal decisions. ...read more.

When Juliet is later on told, she is informed rather than being asked. Although she agrees to the marriage, we know that Juliet was already married, which creates tension in the audience as dramatic irony is being used. In Act three, Scene one, notions of masculinity come up when Tybalt demands for Romeo to fight him, and Romeo refuses to lay a hand on him. Mercutio deeply disapproved of this as he says ?O calm, dishonourable, vile submission!? Mercutio?s bravery is shown as he encourages Romeo to be a man, and fight for his reputation. His language is passionate and intense which helps Romeo to suddenly decide to not only fight him, but kill Tybalt soon after Mercutio?s death. To conclude, the tragedy of Romeo and Juliet was caused by a number of reasons; their identities, their decisions and their expectations from society. Although there were many other reasons, the most commonly mentioned and the one with greatest effects had to be Fate. The main lesson that we can draw from this is that fate could do anything to anyone?s lives, no matter what anyone tries to do. The story of Romeo and Juliet was to be ended in this tragic way and the story will remain with us forever, ?For never was a story of more woe Than this of Juliet and her Romeo.? ...read more.