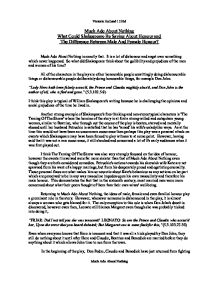 What Could Shakespeare Be Saying About Honour and The Difference Between Male And Female Honour?

Much Ado About Nothing What Could Shakespeare Be Saying About Honour and The Difference Between Male And Female Honour? Much Ado About Nothing is exactly that. It is a lot of dishonour and angst over something which never happened. So what did Shakespeare think about the gullibility and prejudices of the men and women of his time? All of the characters in the play are either honourable people unwittingly doing dishonourable things or dishonourable people deliberately doing honourable things, for example Don John: "Lady Hero hath been falsely accus'd, the Prince and Claudio mightily abus'd, and Don John is the author of all, who is fled and gone." (5.3.102.5-9) I think this play is typical of William Shakespeare's writing because he is challenging the opinions and social prejudices of the time he lived in. Another strong example of Shakespeare's free-thinking and non-stereotypical characters is 'The Taming Of The Shrew' where the heroine of the story is at first a strong-willed and outspoken young woman, similar to Beatrice, who through out the course of the play is beaten, starved and mentally abused until her husband Petruchio is satisfied that he has 'tamed' his wife's unladylike ways. As at the time this would not have been an uncommon occurrence then perhaps this play was a personal attack on events which Shakespeare may have been forced to play witness to at some point. However, having said that it was not a rare occurrence, it still shocked and concerned a lot of it's early audiences when it was first played out. I think The Taming Of The Shrew was also very strongly focused on the idea of honour, however the events it involved were far more sinister than that of Much Ado About Nothing even though they are both considered comedies. Petruchio's actions towards his shrewish wife Kate are not spawned from his want of a happy marriage, but from his desperately proud and egotistic personality. ...read more.

This was the generally conceived opinion about illegitimate children during the sixteenth and seventeenth centuries however again, nowadays we do not think like this, in fact around half of the population come from single parent families with children from one night stands or failed relationships. I think Shakespeare attempts to persuade his audience to dislike and find people dishonourable based on what they do and not on whether or not their parents were married when they were born. I think this because all of the bastards written in Shakespeare's plays are written as villainous or unkind characters, for another example Edmund in King Lear. However, this could be interrupted two completely different ways, one: Shakespeare wanted people to look past the character's illegitimacy and judge them on their actions, or two: Shakespeare shared the common belief of his time that if a person is illegitimate then they will always be bad people so that is what he writes them as. John is a fairly good person for the first part of the play, certainly not matching up to his brother and only starts to show his true colours, namely his black hearted villainy and his yellow-bellied cowardice. Throughout the play though, John is doing things which are dishonest and dishonourable but until he flees instead of staying to face the consequences of his actions at the end of the play, in doing this, he brands himself a coward. Being a coward is basically the only way a man could dishonour himself, whereas a woman could dishonour herself easily. For instance she could have s*x out of wedlock, this is what Hero is accused of and nothing she says to the contrary seems to matter whereas if a man (any man, even John) had been accused of the same thing then he could have denied it and that would have been an end to it. ...read more.

In particular, I believe that he did not share the general opinion of male superiority, or at least not as much as others did. I believe this because almost every one of his plays features a strong willed and dominant woman, in this case Beatrice, who ends up happy. He also portrays a downtrodden or submissive woman, in this case Hero, who, at some point in the course of the play gets beaten down and defeated, whether metaphorically (Hero) or quite literally as in The Taming Of The Shrew, Kate who begins as a fiery young woman much like Beatrice who marries a man she does not love and finishes the play with a disturbing monologue about a woman's job being to obey her Lord completely and never fight with him or nag him. Finally Juliet, in Romeo and Juliet who, believing her love for her new husband to be pointless because of their warring families decides to run away with Romeo rather than stand and defend their marriage to their parents, this - in my opinion - misguided decision leads to both their deaths. I also think that Shakespeare felt that honour and dishonour are not things which one can be born with, rather they must be earned by one's life's deeds, or misdeeds as the case may be. He also seems to be very judgmntal of his own s*x as the bard's song in the play clearly shows that Shakespeare was less than content with the way men treated women in his time and that he thought women were certainly the 'fairer' s*x: "Sigh no more ladies, sigh no more, Men were decievers ever, One foot in sea, and on on shore, To one thing constant never, The sigh not so, but let them go, And be you blithe and bonny, Converting all your sounds of woe Into 'Hey Nonny Nonny!" Victoria Holland 11BM Much Ado About Nothing ...read more.