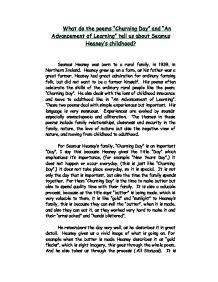 What do the poems &quot;Churning Day&quot; and &quot;An Advancement of Learning&quot; tell us about Seamus Heaney's childhood?

What do the poems "Churning Day" and "An Advancement of Learning" tell us about Seamus Heaney's childhood? Seamus Heaney was born to a rural family, in 1939, in Northern Ireland. Heaney grew up on a farm, as his father was a great farmer. Heaney had great admiration for ordinary farming folk, but did not want to be a farmer himself. His poems often celebrate the skills of the ordinary rural people like the poem "Churning Day". He also deals with the loss of childhood innocence and move to adulthood like in "An Advancement of Learning". These two poems deal with simple experiences but important. His language is very sensuous. Experiences are evoked by sounds especially onomatopoeia and alliteration. The themes in these poems include family relationships, closeness and security in the family, nature, the love of nature but also the negative view of nature, and moving from childhood to adulthood. For Seamus Heaney's family, "Churning Day" is an important "Day", I say this because Heaney gives the title "Day" which emphasizes it's importance, (for example "New Years Day",) it does not happen or occur everyday, (this is just like "Churning Day",) it does not take place everyday, so it is special. It is not only the day that is important, but also the time the family spends together. ...read more.

In my opinion Heaney knew he could confront the rat, and he knew he was ready, but the move from childhood to adulthood was the thing that was stopping him. Heaney realises that the rat is nothing compared to him, and that it is smaller than him, which means it is of no harm to him. Because Heaney had never seen the rats just heard them when they "scraped" "Behind the hen-coop" and also above his bed on the "ceiling boards" he never really finds out that they are harmless, he doesn't know what they look like, but when he comes face to face with one he realises that having a fear of rats is for Children. When Heaney decides to cross the bridge he is leaving all his childhood innocence and also fears. By crossing the "bridge" he brings more responsibility to himself, and also more independence. "Churning Day" and "An Advancement of Learning" have a few similarities but are also very different in many ways. "Churning Day" is a very happy and joyful day whereas "An Advancement of Learning" is very tensed and in suspense. In "Churning Day" the tone is conveyed in different ways in every Stanza. Each stanza has a different tone. ...read more.