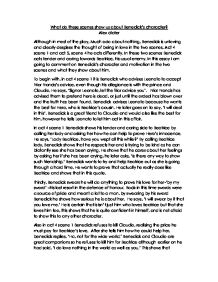 WHat do the scences act 4 scene 1 and act 5 scene 4 tell us about Benedict?

Although in most of the play, Much ado about nothing, Benedick is unloving and clearly despises the thought of being in love in the two scenes, Act 4 scene 1 and act 5, scene 4 he acts differently. In these two scenes Benedick acts tender and caring towards Beatrice, his usual enemy. In this essay I am going to comment on Benedick’s character and motivation in the two scenes and what they show about him.

To begin with, in act 4 scene 1 it is Benedick who advises Leonato to accept Friar Francis’s advice, even though his allegiance is with the prince and Claudio. He says, ‘Signor Leonato, let the friar advice you’.   Friar Francis has advised them to pretend hero is dead, or just until the ordeal has blown over and the truth has been found. Benedick advises Leonato because he wants the best for Hero, who is Beatrice’s cousin. He later goes on to say, ‘I will deal in this’. Benedick is a great friend to Claudio and would also like the best for him, however he tells Leonato to let him act in this affair.

In act 4 scene 1 Benedick shows his tender and caring side to Beatrice by calling her lady and asking her how he can help to prove Hero’s innocence.  He says, ‘Lady Beatrice, have you wept all this while?’ By calling Beatrice lady, Benedick shows that he respects her and is trying to be kind as he can blatantly see she has been crying. He shows that he cares about her feelings by asking her if she has been crying, he later asks, ‘Is there any way to show such friendship.’ Benedick wants to try and help Beatrice out as she is going through a hard time. He wants to prove that actually he really does like Beatrice and shows that in this quote.

Thirdly, Benedick swears he will do anything to prove his love for her-‘by my sword’ –his last resort in the defence of honour. Back in this time swords were a source of pride and meant a lot to a man, by swearing by his sword Benedick he shows how serious he is about her.  He says, ‘I will swear by it that you love me.’ He is certain that is isn’t just him who loves Beatrice but that she loves him too, this shows that he is quite confident in himself, and is not afraid to show this to any other character.

Also in act 4 scene 1 Benedick refuses to kill Claudio, realising the price he must pay for Beatrice’s love.  After she tells him how he could help her, benedick replies, ‘Ha, not for the wide world.’ Benedick and Claudio are great companions so he refuses to kill him for Beatrice although earlier on he had said, ‘I do love nothing in the world as well as you.’ This shows that Benedick can lie and go back on his word. This annoys Beatrice clearly, and would obviously lead her to not completely trust Benedick.

Lastly for Act 4 scene 1 Beatrice convinces Benedick that hero has been wronged and is determined to kill Claudio- ‘by this hand, Claudio shall render me a dear account.’  Beatrice is clearly a very persuasive woman who is used to getting her own way and by using this talent she convinces Benedick that Hero, her cousin, has been wronged. Although Benedick refused earlier to take Claudio on for the whole world, he has now changed his mind he says, ‘I am engaged, I will challenge him.’ He now thinks that Claudio should pay for what he has done, this shows Benedick being loyal to Beatrice and showing that he really does like her.

Turning next to the start of act 5 scene 4 when Benedick hears that Hero’s good name has been restored, he is relieved, because he didn’t really want to kill his best friend.  He says, ‘To call young Claudio to a reckoning for it.’ This shows Benedick being a loyal companion and a good friend, although he had told Beatrice he would kill Claudio he is relived not to be doing it. This may suggest that he was only going to kill him for Beatrice and not really anything to do with him accusing Hero.  To Beatrice, this shows him as a person who would give a lot to her even if he doesn’t necessarily want to.

Secondly in act 5 scene 4 Benedick traditionally asks Leonato for Beatrice’s hand in marriage, but is still unaware of the trick played on him. In these lines Benedick talks in blank verse which shows his honesty to Leonato when he says, ‘This day to be conjoined, In the state of honourable marriage’. Benedick is asking Leonato, who is Beatrice’s uncle, to have her hand in marriage because Beatrice has no parents.  He is unaware that they have been tricked and say she is ‘enigmatical’ which could show that he believes he is far too much in love to see the trick and just says that he is puzzled.

After being the loving and caring Benedick for the start of this scene, he returns to his former self when  he finds out that he has been tricked into believing that Beatrice loved him- ‘Tis no such matter, then you do not love me?’ All what had happened before this scene has been forgotten to them both, as soon as people are around them, who have tricked them into loving each other Beatrice and Benedick act as if they don’t really love each other but secretly both prides have been hurt.  They are both saying they don’t love each other, only as a friend because they now believe that actually it is one big trick. Benedick shows he is confused by saying, ‘They swore that you were almost sick for me?’  Benedick acts like he’s not actually that bother, but he still questions her proving that he would actually like her to admit her love for him.

In addition, even when the love sonnets have been revealed, he still acts casually and back to his usual self. He says, ‘Come I will have thee, but by light I will take thee for pity.’  Benedick is desperate not to admit how much he loves Beatrice without her admitting first or even at all. He is full of male pride, and his obvious nightmare would be for Beatrice to reject him.  Benedick doesn’t want to sound like the loving man he was to Beatrice in front of everyone, as he is well known in the play for his clever wit and dislike to marriage.  In the script he speaks in prose, which suggests he is talking cleverly.

Lastly, he mocks the Prince- ‘get thee a wife’: it was Don Pedro who at the beginning predicted that Benedick would one day fall in love. Benedick is being very ironic.  This is because at the start of the play Benedick claimed to stay unmarried forever. And now he is telling a friend to find a wife.  Near the start of the play Benedick told Don Pedro to ‘Hang me in a bottle like a cat and shoot me’ if he ever got married. Beatrice, Benedick’s once enemy, has completely changed his mind about love and marriage. This leaves us to think that maybe he was in love with her all through their quarrelling. This shows that Benedick can be a man who goes back on his word.

In conclusion, we can see that Benedick clearly has two very different sides to him. He can often be very loving, when on his own, with Beatrice.  However in front of his friends and over people he acts as if he isn’t at all in love, this could be because of his past and being so confident that he was not going to get married. Benedick shows he is full of pride because when he is in front of his friends his denies saying he loved Beatrice and says he doesn’t love her any more than reason. It is obvious to us that the trick worked for Benedick and that he has probably found his true love. We can see that deep down Benedick is a loving character and in these to scene especially, we can see this.