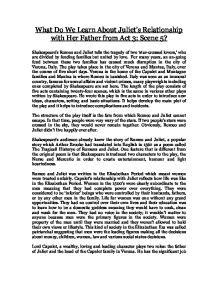 What Do We Learn About Juliet's Relationship with Her Father from Act 3: Scene 5

What Do We Learn About Juliet's Relationship with Her Father from Act 3: Scene 5? Shakespeare's Romeo and Juliet tells the tragedy of two 'star-crossed lovers,' who are divided by feuding families but united by love. For many years, an on-going feud between these two families has caused much disruption in the city of Verona, Italy. The play takes place in the city of Verona and Mantua, Italy, over the course of five short days. Verona is the home of the Capulet and Montague families and Mantua is where Romeo is banished. Italy was seen as an immoral country, famous for s****l affairs and violent crimes, many playwrights including ones completed by Shakespeare are set here. The length of the play consists of five acts containing twenty-four scenes, which is the same in various other plays written by Shakespeare. He wrote this play in five acts in order to introduce new ideas, characters, setting and basic situations. It helps develop the main plot of the play and it helps to introduce complications and incidents. The structure of the play itself is the fate from which Romeo and Juliet cannot escape. In that time, people were very wary of the stars. If two people's stars were crossed in the sky, they would never remain together. Obviously, Romeo and Juliet didn't live happily ever after. Shakespeare's audience already knew the story of Romeo and Juliet, a popular story which Arthur Brooke had translated into English in 1562 as a poem called The Tragicall Historye of Romeus and Juliet. One feature that is different from the original poem is that Shakespeare introduced two characters to the play, the Nurse and Mercutio in order to create entertainment, humour and light heartedness. Romeo and Juliet was written in the Elizabethan Period which meant women were treated unfairly. Capulet's relationship with Juliet reflects how life was like in the Elizabethan Period. Women in the 1500's were clearly subordinate to the men meaning that they had complete power over everything. ...read more.

As a response to Capulet, Juliet tries to reconcile with him by saying, 'Good father, I beseech you on my knees,' but unfortunately Capulet immediately shouts her down, 'Speak not, reply not, do not answer me, my fingers itch.' He has finished dealing with her and by saying that, he is tempted to slap her. Capulet swears to Juliet that if she doesn't marry Paris, she will be disowned and she would have to fend for herself, 'Graze you will, you shall not house with me.' 'An you be mine, I'll give you to my friend. And you be not, hang, beg, starve, die in the streets.' If she is his daughter, she will accept to give her hand in marriage; if she refuses, she's not his daughter and he won't care what happens to her. He says he won't acknowledge her as his daughter, and he won't give her any support. In this Patriarchal society, if a daughter did not obey her fathers' commands, she would be disowned and eventually she would die because she wouldn't be wanted anywhere. His relationship with Juliet has weakened to the point that he doesn't really care for her anymore because she has disobeyed him, after all the time and effort he has put in to find her a good husband. Similarly, Lady Capulet has the same attitude as Capulet and is done with her, 'Do as thou wilt, for I have done with thee.' Lady Capulet is certainly not going to speak up on Juliet's behalf, and she seems to be disgusted with her daughter. The harsh actions of Lord Capulet drive Juliet to feel hopeless resulting in her fate clearly making this a tragedy. A tragedy is a drama with a sad outcome. It is a result of key personality flaw and results in a fall of grace and in this play, it is Juliet who falls from grace. ...read more.

After when Juliet defies her father, she tries to appease her father by begging him for forgiveness and kneels down to let him know that she is in full control of Capulet. Juliet comforts her father by promising to marry Paris which is his initial demand, but this changes his overlook on his daughter once again. He feels as if she has matured into a woman and become the fine daughter she used to be. In this play, Lord Capulet's relationship with his daughter was one that did not function correctly because all his actions worked against Juliet causing her pain and eventually her death. In different parts of the play, this relationship changes erratically because of Capulet's conditional love for Juliet. At one point, Capulet loves Juliet because she has obeyed him but until she doesn't approve of his proposal with Paris, he threatens to disown her and not to love someone who doesn't give thanks for what he has given. However, when Juliet commits suicide, we see a special side of Capulet. He blames himself and his harsh actions for Juliet's suicide and that if he just let her choose who she marries, the ending wouldn't be like this. The tragedy of Romeo and Juliet is not death of two young lovers, but the failure of society to overcome the social 'barriers' that would have prevented the loss of so many innocent lives. If the two families had just stopped feuding earlier, the lives of the two lovers could have been saved. One of these obstacles is fate which is constant throughout the play in order to give the reader a little hope that the two will survive, but with each event, that hope is crushed. The tragedy of Romeo and Juliet teaches the audience a lesson: True love knows no limits. It drives Romeo and Juliet to ignore the barriers of family feud and to defy parental authority. True love finds a way, through death, to unite the lovers eternally. Truly, this young couple shows how love can conquer all things. ...read more.