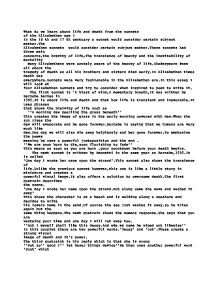 What do we learn about life and death from the sonnets of the Elizabethen age ?

What do we learn about life and death from the sonnets of the Elizabethen age ? In the 16 th and 17 th centuary a sonnet would consider certain subject matter.The Elizabethen sonnets would consider certain subject matter.These sonnets had three main concerns,the brevity of life,The transience of beauty and the inevitability of mortality Many Elizabethens were acutely aware of the beauty of life.Shakespeare knew all about the tragedy of death as all his brothers and sisters died early.In Elizabethen times death was everywhere.Sonnets were very fashionable in the Elizabethen era.In this essay I will look at four Elizabethen sonnets and try to consider what inspired to poet to write it. The first sonnet is 'A blast of wind,A momentary breath,It was written by Barnabe Barnes in 1595.It is about life and death and that how life is transient and inexorable.It uses phrases that shows the breivity of life such as ''A morning dew pearling the grass beneath'' This creates the image of grass in the early morning covered with dew.When the sun rises the dew will evaporate and be gone forever.Barnabe is saying that we humans are very much like dew.One ...read more.

whole world will one day be overcome by death and that in the last line this shall be a testomony to our love.It's the first sonnet to offer a solution to beat death which is through a sonnet. The next sonnet,written in 1609 is called 'Shall I compare thee to a summers day ?' The sonnets asks that question in the first line and says no.It then goes on to give reasons why such as sight ''Thou art more lovely''and touch '' Sometimes too hot the eye of heaven shines''.It picks up on all the faults of summer like''Rough winds do shake the darling buds of May'', ''Natures changing course untrimmed''and ''Every fair from fair sometimes declined''.He then uses the pivot point in the ninth line and says that his lover will never do any of those things ''But thy eternal summer shall not lack,Nor lose possesion of that fair thou oust'' and Nor shall death brag thou wander'st in his shade.In the last rhyming couplet he states his solution to overcoming death which is through the poem.He writes ''So long as men can breathe and eyes can see.So long lives this and ...read more.

All of the sonnets have things in common.They share the same topic which is Love and death.The way all four respective poets deal with it is quite diffent.Barnabe uses different senses to show how short life is .It is a depressing poem and uses a clever juxtaposition at the end ''Birth and death and flourishing and fade''In ''One day I wrote her name upon the strand''Amorreti speaks about his lover and how he plans to preserve her through all eternity through the sonnet.In ''Shall I compare thee to a summers day'' the poet looks at summer and compares it to his metaphorical summer,his lover and in ''That time of year in mayst behold'it uses everyday objects such as trees and fires and conotations with death. All of these subjects deal with two major subjects in four different ways.There is no right or wrong way to tackle these sensitive issues but with the imagination of these four poets,I can look at them now in a positive and new way just like the people of the Elizabethen times would have done four hundred years ago. ...read more.