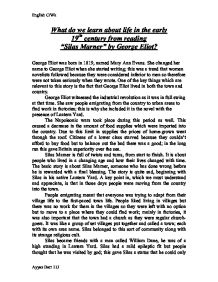 What do we learn about life in the early 19th century from reading &quot;Silas Marner&quot; by George Eliot?

What do we learn about life in the early 19th century from reading "Silas Marner" by George Eliot? George Eliot was born in 1819, named Mary Ann Evans. She changed her name to George Eliot when she started writing; this was a trend that women novelists followed because they were considered inferior to men so therefore were not taken seriously when they wrote. One of the key things which are relevant to this story is the fact that George Eliot lived in both the town and country. George Eliot witnessed the industrial revolution as it was in full swing at that time. She saw people emigrating from the country to urban areas to find work in factories; this is why she included it in the novel with the presence of Lantern Yard. The Napoleonic wars took place during this period as well. This caused a decrease in the amount of food supplies which were imported into the country. Due to this limit in supplies the prices of home-grown went through the roof. Citizens of a lower class starved because they couldn't afford to buy food but to balance out the bad there was a good; in the long run this gave Britain superiority over the sea. Silas Marner is full of twists and turns, from start to finish. It is about people who lived in a changing age and how their lives changed with time. The basic story is about Silas Marner, someone who has done wrong before he is rewarded with a final blessing. The story is quite sad, beginning with Silas in his native Lantern Yard. A key point in, which we must understand and appreciate, is that in those days people were moving from the country into the town. People emigrating meant that everyone was trying to adapt from their village life to the fast-paced town life. People liked living in villages but there was no work for them in the villages so they were left with no option but ...read more.

Nancy was as supportive as could be expected and she told her husband to reclaim Eppie as her own. Silas had taken care of Eppie for most of her life so it was no surprise that she chose to stay with him when it was up to her to make the final decision between living with the Cass' or Silas; she chose Silas after a fierce battle between him and Godfrey over who would look after her. Silas had a long talk with Dolly Winthrop who influenced his decision to take Eppie to Lantern Yard. When Silas arrived there he was shocked to find it had disappeared off the face of the heart; instead of Lantern Yard there was a huge factory standing there. The story ended with Eppie marrying Aaron. The Cass' were not present but only two people knew the real reason behind their absence. Eliot was a fantastic writer; this story was structured in a fantastic way. Initially there are two stories; one of Silas Marner and the other of the Cass family. The main characters in Silas Marner are obviously Silas himself, Godfrey, Eppie, Dolly Winthrop, Nancy, Dunstan, Squire Cass and Aaron Winthrop. Silas is a strange man, he was an outsider from the moment he moved into Raveloe, but he was changed by Eppie; she forced him to socialise with people and to go to church. Godfrey was very unlucky, he was Dunstan's brother, his young-adulthood was full of disasters; starting with the marriage to Molly Farren. His luck did change however, after the disappearance of his brother and the death of Molly, Godfrey was able to sort himself out and marry Nancy; his life was shaping the way he wanted it to. Eppie was the "illegitimate" child of Godfrey and Molly. After the demise of her mother she was adopted by Silas. Silas bought Eppie up, through the tussle with the Cass' until she married Aaron. ...read more.

This is shown in the story when Dolly Winthrop speaks to Silas. "'Eh, Master Marner,' said Dolly, 'there's no call to buy, no more nor a pair o' shoes.'" Dolly Winthrop, Chapter 14, Page 162, Lines 10-11 In conclusion I have learnt that life was very unpredictable in the early 19th century. People always had to live life with strict rules but they always helped each other out; people were friendly to those they knew. We also see that people want a sense of community even in towns and life was based around a hierarchy. I think that Eliot thought of the town as horrible and liked the idea of living in the country; shown in chapter 2 when she describes the awful smell and conditions. This is because she has lived in both town and country herself, and she says that she preferred the country. It is not surprising that the novel informs about the time it was set because writers always wrote about the time they lived in and what they saw and then commented on it in their writing. I enjoyed reading "Silas Marner" and there are two reasons behind this. Firstly because it was very well written and taught me a lot about the time it was set in and secondly because it has a story behind it; Mary Ann Evans changing her name to George Eliot in order to get the respect she deserved as a novelist. This was interesting to me because in my opinion things are better if there is a good story behind them and I feel although the change in name is a very small story it has a very huge meaning, it proves that women were thought of as inferior when in actual fact just as good as the men or maybe even better. I would recommend this novel to anyone who would like to learn about early 19th century life or anyone who is after a good read because this novel is most definitely a very enjoyable read. English C/Wk Ayyaz Darr 11J ...read more.