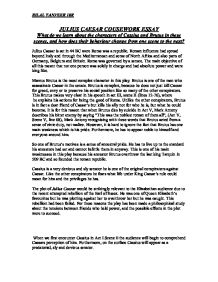 What do we learn about the characters of Cassius and Brutus in these scenes, and how does their behaviour change from one scene to the next?

JULIUS CAESAR COUSEWORK ESSAY What do we learn about the characters of Cassius and Brutus in these scenes, and how does their behaviour change from one scene to the next? Julius Caesar is set in 44 BC were Rome was a republic. Roman influence had spread beyond Italy and through the Mediterranean and some of North Africa and also parts of Germany, Belgium and Britain. Rome was governed by a senate. The main objective of all this meant that not one person was solely in charge and had absolute power and were king like. Marcus Brutus is the most complex character in this play. Brutus is one of the men who assassinate Caesar in the senate. Brutus is complex, because he does not just kill Caesar for greed, envy or to preserve his social position like so many of the other conspirators. This Brutus makes very clear in his speech in act III, scene II (lines 12-76), where he explains his actions for being the good of Rome. Unlike the other conspirators, Brutus is in fact a dear friend of Caesar's but kills his ally not for who he is, but what he could become. It is for this reason that when Brutus dies by suicide in Act V, Mark Antony describes his bitter enemy by saying "This was the noblest roman of them all", (Act V, Scene V, line 68), Mark Antony recognising with these words that Brutus acted from a sense of civic duty, not malice. However, it is hard to ignore the fact that Brutus has one main weakness which is his pride. Furthermore, he has to appear noble to himself and everyone around him. So one of Brutus's motives is a sense of ancestral pride. He has to live up to the standard his ancestors had set and cannot belittle them in anyway. This is one of his main weaknesses in this play because his ancestor Brutus overthrew the last king Tarquin in 509 BC and so founded the roman republic. ...read more.

There was a Brutus once", Cassius is now talking about Brutus's ancestral pride he is saying he has to act now and do something about it or he is letting his ancestors down even though he has the power to do something about it. This now is Cassius`s final attempt to manipulate Brutus, and to an extent he has succeed and manipulated Brutus. This would suggest that Cassius is very devious and sly but at the same time very clever to manipulate Brutus to a certain extent to make him admit that he does fear Caesar to be king and he has thought about this issue before. It is hard to ignore the fact, that Cassius wants Caesar killed only for the reason of his privileges being limited, and is afraid what life under Caesar would be like. Marcus Brutus is a very proud and noble man as we find out in this scene. We also learn that he has many weaknesses which Cassius has exploited. Furthermore, Brutus's main weakness in this play is undoubtedly to appear noble to himself and everyone around him. Also, another one of his main weaknesses is his ancestral pride. Cassius has exploited into this weakness, and is telling Brutus that he cannot degrade his ancestors in anyway and must act and do what's good for Rome. The audience cannot begin to vilify Brutus in any way as what he is doing is for the good of Rome, and is doing the honourable thing, "The name of honour more than I fear death", and he is saying he has turned his attention to this to regain a sense of pride & power and to reinstate a sense of his honour. In this scene when Brutus is being manipulated by Cassius Brutus knows that Cassius is trying to manipulate him into joining their conspiracy to assassinate Caesar, However the audience by now will begin to understand that Brutus is a very proud man. ...read more.

Also, the other conspirators have to obey Brutus and are starting to agree with what he says. As a result of this what ever Cassius suggests Brutus just slaps it down Cassius is getting weaker and weaker and has to go along with some of Brutus's suggestions to regain some of his pride & honor. Nevertheless Cassius makes another good suggestion, "let Antony and Caesar fall together", but again Brutus just slaps this down because Cassius has said it although Brutus was wrong to this and let Mark Antony get away with it because it would soon lead to the conspirators downfall. Again Brutus is adopting a position of superior power and superior moral position to degrade Cassius. "Let us be sacrificers but not butchers" To the audience this would suggest that Brutus is not a villain he is projecting a self image of an honourable man. To do what is good for Rome, and not to kill anyone other than Caesar. By the end of this scene Brutus has completely destroyed Cassius`s authority and is now the leader of the conspiracy as at the end he dismisses the conspirators which would suggest that he is in power and is pre-eminent. Also gestures in Macbeth as the storm symbolises prefigures suggest the violent change in society and symbolises prefigures of the fall of Caesar. Cassius speaks less in this scene because Brutus has simply destroyed all of Cassius authority in the conspiracy. What ever Cassius suggested Brutus just slapped it down And degraded and debased Cassius. Cassius at the start of the scene would have been confident to just come and inflate Brutus's ego further but Brutus was ready for Cassius and not imbalanced and wouldn't let Cassius inflate his ego further. Also, Brutus violently Disabuses Cassius forcing him onto the back foot and having to appear weaker in front of the pre- eminent Brutus. Also he would have to agree with everything Brutus said to regain a sense of pride and honour. ?? ?? ?? ?? BILAL TANVEER 10R ...read more.