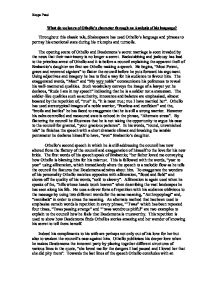 What do we learn of Othello's character through an Analysis of his language?

What do we learn of Othello's character through an Analysis of his language? Throughout this classic tale, Shakespeare has used Othello's language and phrases to portray his emotional state during his triumphs and turmoils. The opening scene of Othello and Desdemona's secret marriage is soon invaded by the news that their matrimony is no longer a secret. Backstabbing and jealousy has lead to the priceless arrest of Othello and it is before a council explaining the apparent theft of Brabantio's daughter we first see Othello making a speech. He begins, "Most Potent, grave and reverend signiors" to flatter the council before he puts forward his argument. Using adjectives and imagery he has to find a way for his audience to favour him. The exaggerated words, "Most" and "My very noble" communicate his politeness to reveal his well-mannered qualities. Such vocabulary conveys the image of a lawyer yet he declares, "Rude I am in my speech" indicating that he is a soldier not a statesman. The soldier-like qualities such as authority, innocence and balance are emphasised, almost boasted by the repetition of, "true" in, "It is most true; true I have married her". Othello has used stereotypical images of a noble warrior, "Fearless and confidant" and the, "broils and battles" he has faced to exaggerate that he is still a strong warrior. ...read more.

Iago has set out a trap for his victim to fall into. As Othello's status lowers he uses religious imagery, "Chaos has come again" portraying how his degraded status has lead him to think that Satan's face is starting to show. As Iago repeats words or phrases from Othello they both start to share the iambic pentameter again, Othello: "What dost thou think?" Iago: "Think, my lord!" but Othello finally loses his control, "By heaven, he echoes me". It is unusual for Othello to lose his temper, as it is evident that he remained calm when Brabantio accused Desdemona of being a witch. Iago has achieved the first part of his plan. Othello's words carry much irony, "as if there were some monster in his thoughts" and are also true but Iago only knows this as a previous speech made by him revealed his plan and his thoughts were devilish, "h**l and night must bring this monstrous birth to light". Iago tends to complete gaps in Othello's thoughts and we can see emerging again how Othello follows Iagos' lead "Would be what they seem" and "Should be what they seem". By doing so Iago uses the break in the iambic pentameter to reduce any feeling of security that Othello has left behind. ...read more.

This may refer to her eyes and, in the process shutting them. Her light. This imagery is represented by the use of the Greek myth "Promethean Heath" also meaning light. Othello realises that there is no turning back. Her body is now lifeless and soon he tries to convince himself that he has served justice, "plucked thy rose". However much Othello's sentences are restored to their original standard the madness of killing without trial has proved Othello's mind frame is still in the hands of Iago. In his last speech Othello successfully deludes his audience into assuming that he is the hero in his original status once more, "and smote him thus". Convinced that Desdemona is, "a pearl he threw away", a pure woman for the last time he has reclaimed his love for her. The use of his vocabulary contains many adjectives, "malignant" and "circumcised". Such a varied use of adjectives produces an image of a master storyteller. This is ironic as the master storyteller was the exact thing that drew Desdemona towards Othello. As the audience assumes a grand story is about to be told once again judging from the imagery and strength of vocabulary he uses, the real feelings of depression and guilt is hidden. Using actions to convey his story he administers the coup de gr�ce by stabbing himself and watched by an unsuspicious audience, "and smote him thus". Krupa Patel ...read more.