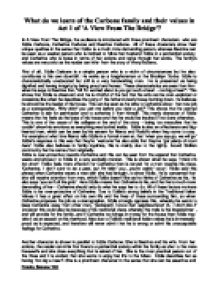 What do we learn of the Carbone family and their values in Act 1 of 'A View From The Bridge'?

What do we learn of the Carbone family and their values in Act 1 of 'A View From The Bridge'? In A View From The Bridge, the audience is introduced with three prominent characters who are Eddie Carbone, Catherine Carbone and Beatrice Carbone. All of these characters show their unique qualities in the sense that Eddie is a much more demanding person, whereas Beatrice can be seen as a weaker person who is inclined to follow her husband Eddie in a patriarchal society and Catherine who is loose in terms of her actions and naive through her words. The family's values are very strict as the reader can infer from the story of Vinny Bolzano. First of all, Eddie Carbone is a simple person who is a victim of circumstances but he also contributes to his own downfall. He works as a longshoreman at the Brooklyn Docks. Eddie is characteristically uneducated but still is a very hardworking man. He is presented as being dignified and having integrity by being proud and honest. These characteristics are seen from him when he says to Beatrice that, "All I'm worried about is you got such a heart...too big a heart". This shows that Eddie is observant and he is mindful of the fact that his wife can be over-exploited at occasions like when he describes the story of his father-in-law's house burning down. ...read more.

She is a prominent character in the sense that she can be assertive and provocative at the same time. In the argument of whether or not to send Catherine to work, Beatrice consistently opposes Eddie and thinks that she is right, 'BEATRICE: (with sympathy but insistent force)' clearly shows her character that she is persistent and assertive as she believes that this would be beneficial to Catherine and that perhaps with Catherine gone Eddie's feelings towards Catherine would deteriorate. Beatrice also plays a key role in provoking some of the plays most tense moments and dramatic scenes, such as when she says 'When am I gonna be your wife again?' here she creates one of the most tense scenes in the play because she has offended Eddie's manhood and crushed his pride, which Eddie is very protective and sensitive about. In this example we see that Beatrice is in fact quite a strong-willed, resilient character with a good sense of right and wrong. Through this perspective, it can also be inferred that Beatrice is the one who ties the family together justifying the morally righteousness and also carried justice with her. This can be said when she tells the story of Vinny Bolzano. She doesn't appear to be telling this story with any bias, however, she is frank about it and by her words she demonstrates the values of the family and the consequences that lie if anyone snitches. ...read more.

To conclude, Act One of A View From The Bridge, is very detailed into posing the three characters that feature prominently from the mixed feelings of Eddie towards Catherine and Beatrice who is persistently wanting to get her message across for the good of everyone. She has a sense of what is morally just and unjust and conveys this through her words - she wants Catherine to be more independent than what Eddie wants. She is a distinct member of a patriarchal society as it can be seen her normal role on a day-to-day basis is of a housewife and that following all what Eddie has demanded of her. Eddie is a much more demanding character and very controlling. He considers his image very strongly and wants all men to have all the masculine qualities like himself. Especially, Rodolfo who he is disgusted by and poses all the opposite characteristics of a man, he wants to keep his niece away from him. This manly character of his makes everyone think that he is a very prideful person. Catherine on the other hand is very na�ve and inexperienced. By her modesty, it is blatantly seen that she has been kept inside the house a lot and that she hasn't had much exposure outside. She is also emotionally attached towards Eddie, however, Eddie's much stronger feelings towards her are unaware by Catherine. Overall, the family is presented as a normal family in America with opposing characteristics of each family member. ?? ?? ?? ?? Franky Saxena 10U ...read more.