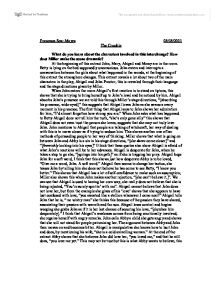 What do you learn about the characters involved in this interchange? How does Miller make the scene dramatic?

Francesca Sear-Mayes 08/18/2001 The Crucible What do you learn about the characters involved in this interchange? How does Miller make the scene dramatic? At the beginning of this extract John, Mary, Abigail and Mercy are in the room. Betty is lying on the bed supposedly unconscious. John enters and interrupts a conversation between the girls about what happened in the woods, at the beginning of this extract the atmosphere changes. This extract reveals a lot about two of the main characters in the play, Abigail and John Proctor; this is revealed through their language and the stage directions given by Miller. When John enters the room Abigail's first reaction is to stand on tiptoes, this shows that she is trying to bring herself up to John's level and be noticed by him. Abigail absorbs John's presence we are told this through Miller's stage directions, "[absorbing his presence, wide-eyed]" this suggests that Abigail loves John as she savours every moment in his presence. The first thing that Abigail says to John shows her admiration for him, "I'd almost forgotten how strong you are." When John asks what has happened to Betty Abigail does not tell him the truth, "she's only gone silly" this shows that Abigail does not even trust the person she loves; suggests that she may not truly love John. ...read more.

I think that Abigail's weakness comes from being emotionally involved; she regains herself with angry remarks. John calls Abby a child she gets angry and shows that she will not stand for people patronizing her. The argument between Abby and John then moves on and becomes bitter. Abigail is manipulative she knows how to hurt John and does, by mentioning his wife, "she is a cold snivelling woman." At the end of the extract Abby shows that she believes John did love her, "you loved me," and that he still does, "you love me yet." This may not be true but this is what Abby wants to believe, this shows a lot about Abby's character and her role in the play, as the accuser, further on in the play it is not only Abby who believe her wild accusations. This is the first extract in which John features in we are told when he enters that he has a strong physical appearance; this is probably what attracted Abby to him in the first place. When John enters the room he immediately shows his superiority over the girls by sending Mary home and threatening her, "I'll show you a great doin' on your arse." ...read more.

John then tries another way of rejecting Abby by denying all that happened between them, "We never touched." This shows a certain degree of cowardice, he should just tell Abby once and for all it is over. John is a good honourable man, he get angry when Abby speaks badly of Elizabeth, "[angered - at himself as well]" John is angry at himself because he knows he has sinned and done wrong to Elizabeth. John even goes so far as to get violent with Abby, "[shaking her]" this shows how he regrets ever getting involved with Abby. Mercy and Mary are very minor characters in this extract and we do not really learn anything about their characters they will be featured further on in the play and I think we will learn more later on. A lot of the character points that are revealed of the two main characters are shown through Millers stage directions these directions also make the scene dramatic. There are many directions which give the reader a good idea of the scene and what is going on, this involves the reader more in the play. In the dialogue between Abby and John they often interrupt each other this adds tension to the scene. The pace is fast moving as John and Abby change tone of voice at stages in the extract which adds excitement to the scene. ...read more.