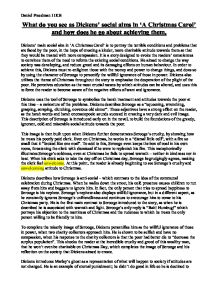 What do you see as Dickens' social aims in 'A Christmas Carol' and how does he go about achieving them?

What do you see as Dickens' social aims in 'A Christmas Carol' and how does he go about achieving them. Dickens' main social aim in 'A Christmas Carol' is to portray the terrible conditions and problems that are faced by the poor, in the hope of creating a kinder, more charitable attitude towards them so that they would be treated with more compassion. It is a story designed to evoke the readers' consciences to convince them of the need to reform the existing social conditions. He aimed to change the way society was developing, and reduce greed and its damaging effects on human behaviour. In order to achieve this, Dickens must re-enlighten those with the money and power to change things, and does so by using the character of Scrooge to personify the willful ignorance of those in power. Dickens also utilizes the theme of Christmas throughout the story to emphasise the desperation of the plight of the poor. He perceives education as the most crucial means by which attitudes can be altered, and uses this to force the reader to become aware of the negative effects of want and ignorance. Dickens uses the tool of Scrooge to symbolise the harsh treatment and attitudes towards the poor at this time - a caricature of the problems. Dickens describes Scrooge as a "squeezing, wrenching, grasping, scraping, clutching, covetous old sinner". These adjectives have a strong effect on the reader, as the harsh words and harsh onomatopoeic sounds succeed in creating a very dark and evil image. This description of Scrooge is introduced early on in the novel, to build the foundations of the greedy, ignorant, cold and miserable social attitude towards the poor. ...read more.

The first spirit looks like both an old man and a child. This is used to represent the whole of society, and that everyone must become kinder for it to improve. Dickens also describes it to have a "tunic of purest white" and a "lustrous belt, the sheen of which was beautiful". It is also described to have a jet of light shooting out of its head. All these light and beautiful things contrast to the dark home and personality of Scrooge, and represent truth - emphasising Scrooge's darkness and therefore ignorance. The spirit tells Scrooge that his objections to happiness have forced it to wear a cap "low upon its brow", which represents the drag on society that this attitude has created. The spirit says, "Would you so soon put out, with worldly hands, the light I give?" This shows that Scrooge does not want to see the truth, and is therefore trying to extinguish the light of education to create darkness, or ignorance, which he is more comfortable with - just as society are. A change in Scrooge is evident almost immediately, when he is shown himself as a boy, left in his school over Christmas. Scrooge starts to cry, which presents a strong message to the reader - that if this miserable, cruel old man can change and be shown to feel something, then so can they. When the sprit takes Scrooge to Fezziwig, his old employer, another contrast to Scrooge is introduced. Fezziwig is a kind and compassionate man, described to have a "comfortable, oily, rich, fat, jovial voice", which contrasts to Scrooge being "covetous" and "grasping". Like Scrooge's nephew, Fezziwig is used to show how different life is for someone who spreads love and happiness, rather than greed. ...read more.

Scrooge also says "I will not shut out the lessons that they teach" - this shows he has lost his ignorance and has therefore become a better person. Dickens message here is that if more people were changed like this, then society would change and therefore so would the situation of the poor. The key incident in 'A Christmas Carol' that explains Dickens' social aims is when the 'present' ghost reveals the two children from beneath his cloak, representing ignorance and want. Dickens wants to alleviate the ignorance of those who could help to change things but choose to ignore them. These two children are used to show that ignorance and want can drive you to greed, envy and stealing - it is ignorance that is driving the evil in the world. Scrooge has become a light, warm and soft person, laughing and enjoying life. He helps the Cratchits, and Tiny Tim lives, which shows how this change will have a positive effect - a parable for what Dickens feels should happen. The novel produced some immediate effects, causing an American factory owner to give his employees an extra day off work and a social critic to go out and buy a turkey. Dickens made the reader at the time face up to the social deprivation, and was part of the process of creating a social conscience. Dickens also wanted to alter the situation of the poor at the time, by removing what he believed to be 'dark' ignorance, using the 'light' of education - so the poor could help themselves. 'A Christmas Carol' also enables today's reader to the importance of today's Welfare State, without which the poor would have no respite. This shows that Dickens succeeded in contributing to the change in social attitudes, therefore achieving his aims. Daniel Freedman 11KB ...read more.