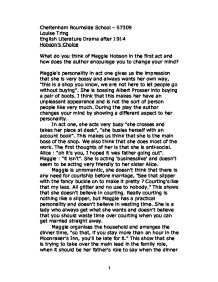 What do you think of Maggie Hobson in the first act and how does the author encourage you to change your mind?

Cheltenham Bournside School - 57309 Louise Tring English Literature Drama after 1914 Hobson's Choice What do you think of Maggie Hobson in the first act and how does the author encourage you to change your mind? Maggie's personality in act one gives us the impression that she is very bossy and always wants her own way, "this is a shop you know, we are not here to let people go without buying". She is bossing Albert Prosser into buying a pair of boots. I think that this makes her have an unpleasant appearance and is not the sort of person people like very much. During the play the author changes your mind by showing a different aspect to her personality. In act one, she acts very busy "she crosses and takes her place at desk", "she busies herself with an account book". This makes us think that she is the main boss of the shop. We also think that she does most of the work. The first thoughts of her is that she is anti-social. Alice : "oh it's you, I hoped it was father going out". Maggie : "it isn't". She is acting 'businesslike' and doesn't seem to be acting very friendly to her sister Alice. Maggie is unromantic, she doesn't think that there is any need for courtship before marriage, "See that slipper with the fancy buckle on to make it pretty ? Courting's like that my lass. All glitter and no use to nobody." This shows that she doesn't believe in courting. Really courting is nothing like a slipper, but Maggie has a practical personality and doesn't believe in wasting time. She is a lady who always get what she wants and doesn't believe that you should waste time over courting when you can get married straight away. Maggie organises the household and arranges the dinner time, "so that, if you stay more than an hour in the Moonraker's Inn, you'll be late for it." ...read more.

I'm finding Will a job. You can come back to your old bench in the cellar, Will, and I'll pay you the old wage of eighteen shillings a week and you and me'll go equal whacks in the cost of housekeeping, and if that's not handsome, I dunno what is. I'm finding you a house rent free and paying half the keep of your wife." Hobson thinks that he's giving them a good deal, but now Will and Maggie have got their own business, they get a lot more than that. I think that Hobson is being mean giving Will a small amount of money when he is the one who gets all the customers in. At the beginning of the book Maggie behaves in a terrible way to Will Mossop, Mrs. Hepworth came round to see the person who made the boots because they are so comfortable and she gives him her card, "you'll keep that card Mossop, and if you'll dare leave here to go to another shop without letting me know where you are." She gives him a great compliment and tells Hobson that he gets underpaid. At that point, Hobson gets Will to go down and carry on with his work. Maggie has seen how Mrs. Hepworth has responded to Will Mossop, and Maggie has thoughts and plans to get her and Will some money. Will Mossop, who isn't described very positively, "he is a lanky fellow about thirty, not naturally stupid, but stunted mentally by a brutalised childhood. He is a raw material of a charming man, but, at present, it requires a very keen eye to detect his potentialities. His dark clothes are an even poorer addition of Tubbies. He comes half way up the trap." This tells us that he doesn't have much respect and is not very clever. Maggie calls Will up when the others are not around. ...read more.

Maggie is pleased with Will's progress of becoming more high class and when he asks her if he did the right thing, she replies, "Don't spoil it Will. You're the man I've made you and I'm proud." This shows that she feels Will has become a better man. Will also thinks very highly of Maggie for what she has helped him to do. He say, "Thy pride is not in same street, lass, with the pride I have in you." I think that this is good because they respect each other and all the time that they have spent with each other they have grown to love each other. Maggie is not liked at the start of the play because she is extremely bossy and has to have her own way. But when we get to know Maggie more, we realise that she does it for other people's good. She is not expected to take the head of house role, but to be the servant of her father or husband. This shows that Maggie is more of a modern woman and expects to be as good as a man. Maggie isn't the sort of lady who would get bossed around, and therefore doesn't seem like a woman of the 1880's. When Hobson comes round and wants to talk with Maggie about the trouble with the Beenstocks, Maggie is ironic and jokes it's a man's job. I think that Maggie has a good personality, she is only bossy so that everything is organised quickly and without any fuss. Maggie helped and worked hard all her life which makes her seem quite 'businesslike' and unkind. Really she is kind. She helped her sisters to get husbands when they were unkind to her. This shows that she doesn't hold grudges against anyone. If it wasn't for her, Will would be still working for her father earning little money and without knowledge to read and write. I feel that if you think that Maggie has a bad personality then your view Maggie needs to be revised because she is always a force for good. 1 ...read more.