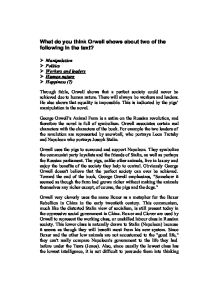 What do you think Orwell shows about two of the following in the text?

What do you think Orwell shows about two of the following in the text? > Manipulation > Politics > Workers and leaders > Human nature > Happiness (?) Through fable, Orwell shows that a perfect society could never be achieved due to human nature. There will always be workers and leaders. He also shows that equality is impossible. This is indicated by the pigs' manipulation in the novel. George Orwell's Animal Farm is a satire on the Russian revolution, and therefore the novel is full of symbolism. Orwell associates certain real characters with the characters of the book. For example the two leaders of the revolution are represented by snowball, who portrays Leon Trotsky and Napoleon who portrays Joseph Stalin. Orwell uses the pigs to surround and support Napoleon. They symbolize the communist party loyalists and the friends of Stalin, as well as perhaps the Russian parliament. The pigs, unlike other animals, live in luxury and enjoy the benefits of the society they help to control. Obviously George Orwell doesn't believe that the perfect society can ever be achieved. ...read more.

Old Benjamin, an elderly donkey, is one of Orwell's most mysterious and intriguing characters on Animal Farm. He is described as rather unchanged since the rebellion. He still does his work the same way, never becoming too exited or too disappointed about anything that has passed. Benjamin explains, "Donkeys live a long time. None of you has ever seen a dead donkey." Although there is no clear metaphoric relationship between Benjamin and Orwell's analysis of communism, it makes sense that during any rebellion there or those who never totally embrace the revolution those so sceptical they no longer look to their leaders for help. Benjamin symbolizes the older generation, the critics of any new rebellion. Really this old donkey is the only animal who seems as though he couldn't care less about Napoleon and Animal Farm. It's almost as if he can see into the future, knowing that the revolt is only a temporary change, and will flop in the end. Benjamin is the only animal who doesn't seem to have expected anything positive from the revolution. ...read more.

Orwell narrates, "Silent and terrified, the animals crept back into the barn. In a moment the dogs came bounding back. At first no one had been able to imagine where these creatures came from, but the problem was soon solved: they were the puppies whom Napoleon had taken away from their mothers and reared privately. It was noticed that they wagged their tails to him in the same way as the other dogs had been used to do to Mr. Jones." The use of the dogs begins the evil use of force, which helps Napoleon maintain power. Later, the dogs do even more horrible things when they are instructed to kill the animals labelled "disloyal." Stalin, too, had his own special force of "helpers". Really there are followers loyal to any politician or government leader, but Stalin in particular needed a special police force to eliminate his opponents. This is how Trotsky was killed. Orwell uses fable to show that the perfect society can never be achieved: there will always be workers and leaders, because of the faults in human nature. ...read more.