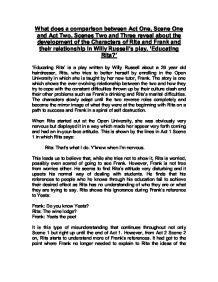 What does a comparison between Act One, Scene One and Act Two, Scenes Two and Three reveal about the development of the Characters of Rita and Frank and their relationship in Willy Russell's play, 'Educating Rita?'

What does a comparison between Act One, Scene One and Act Two, Scenes Two and Three reveal about the development of the Characters of Rita and Frank and their relationship in Willy Russell's play, 'Educating Rita?' 'Educating Rita' is a play written by Willy Russell about a 26 year old hairdresser, Rita, who tries to better herself by enrolling in the Open University in which she is taught by her new tutor, Frank. The story is one which shows the ever evolving relationship between the two and how they try to cope with the constant difficulties thrown up by their culture clash and their other problems such as Frank's drinking and Rita's marital difficulties. The characters slowly adapt until the two reverse roles completely and become the mirror image of what they were at the beginning with Rita on a path to success and Frank in a spiral of self destruction. When Rita started out at the Open University, she was obviously very nervous but displayed it in a way which made her appear very forth coming and had an in-your-face attitude. This is shown by the lines in Act 1 Scene 1 in which Rita says: Rita: That's what I do. ...read more.

He doesn't like his job and his is almost constantly drunk. It appears that he has been like this for a while because in Act 1 Scene 1 he is talking to his partner, Julia as though this had been going on for some time: Frank: ... Yes. Yes, I probably shall go to the pub afterwards. I shall need to go to the pub afterwards. I shall need to wash away the memory of some silly woman's attempts to get into the mind of Henry James or whoever we're meant to be studying on this course... Oh God, why did I take this on?... Yes I suppose I take it on to pay for the drink... This allows us to see that Frank does have a drinking problem and that he is not in his profession because he enjoys it. He merely does it to pay for the alcohol he drinks. However, he does have some restraint from vices as he reveals to Rita that he tries not to smoke. However, as the play continues, Frank slowly slips into a decline. It comes to a head in Act 2 Scene 3 where instead of drinking in private like he was instructed to by the governors of the university, he gets drunk during a lecture and is severely reprimanded for it: Frank: Pissed? ...read more.

This begins to show that Frank has become unhappy with Rita's learning and that he seems to have a problem with Rita advancing as far as she has done. Up until the end of the play, Rita and Frank are barely on speaking terms and try to avoid one another. Rita and Frank's relationship manages to grow so much that they become good friends until it has the massive crash and goes into a state of not talking to each other. This state of cold war ends as the two talk to one another once more at the end shortly before Frank leaves and the play ends. In conclusion, the comparison between Act 1 Scene 1 and Act 2 Scenes 2 and 3 show us that Frank and Rita managed to completely flip their lives around. However, the playwright also shows that not all changes are for the better as Frank loses his job and Rita becomes alienated from her family and community. So while Willy Russell shows that we must strive to better ourselves and our community around us, we cannot lose touch from it or believe that we are any better than when we started ...read more.