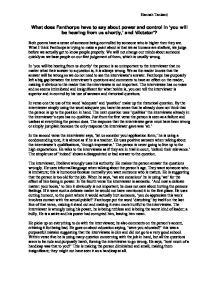 What does Fanthorpe have to say about power and control in 'you will be hearing from us shortly,' and 'dictator'?

What does Fanthorpe have to say about power and control in 'you will be hearing from us shortly,' and 'dictator'? Both poems have a sense of someone being controlled by someone who is higher then they are. What I think Fanthorpe is trying to make a point about is that we as humans are shallow, we judge before we actually get to know people properly. We will not change our minds about someone quickly as we base people on our first judgement of them, which is usually wrong. In 'you will be hearing from us shortly' the person is so unimportant to the interviewer that no matter what their answer to a question is, it is always wrong. We as the reader knows that the answer will be wrong so we do not need to see the interviewee's answer. Fanthorpe has purposely left a big gap between the interviewer's questions and comments to have an effect on the reader, making it obvious to the reader that the interviewee is not important. The interviewee has no voice and so seems intimidated and insignificant for what he/she is, you can tell the interviewer is superior and in control by his use of sarcasm and rhetorical questions. ...read more.

Within verse five he is using many question concerning with the job in hand, but all the questions seem to be rude and purposely harsh, forcing the interviewee to go wrong. He says, 'how much of a handicap was that to you?' This is making the person diminished and small, making them insignificant; they might not have seen it as a handicap at all. In the sixth verse a condescending tone is used again. The interviewer is speaking as if he has heard it all before. This time the lines are enjambment, this could reflect on the continuous boring life of this 'dubious' interviewee. He again uses sarcasm, 'domestic disasters shimmer,' the two alliterate words fall back to nothing when the word shimmer is used, which is opposite to what the person is. 'And you were born -?' suggests to the reader that it would have been better if the person had not have been born at all. 'So glad we agree,' shows this man's sarcastic cutting humour biting back again, soulfully and purposely trying to hurt the interviewee. He does not actually agree he is just trying to quickly get rid of this person. ...read more.

'With all his enemies liquidated' he has destroyed everything, and has used his power like he is in the military. He fires people like it as easy as a full stop. The most important thing he forgets to do, he forgets to sign the letters. Without his signature they are useless and mean nothing and it would have been a waste of time. This just shows even if people are in power they cannot escape vulnerability. He was made out to be amazing and the best when in reality he was not as great as thought to have been. He is quite alright to organise other people and make sure that they do their jobs but when it comes to his own organisation he is useless, as it does not involve bossing somebody else about. Power can lead people to become vulnerable, they get so wrapped up in their big heads they forget simple things. Power also ruins other people lives making them feel ever small and worthless. The two poems suggest that we should not judge other people by their status or looks but by their inside, the real person. Hannah Tankard ...read more.