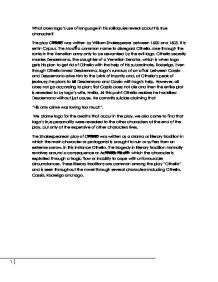 What does Iago's use of language in his soliloquies reveal about his true character?

What does Iago's use of language in his soliloquies reveal about his true character? The play Othello was written by William Shakespeare between 1600 and 1605. It is set in Cyprus. The Moor, a common name to disregard Othello, rose through the ranks in the Venetian army only to be de-ranked by the evil Iago. Othello secretly marries Desdemona, the daughter of a Venetian Senator, which is when Iago gets his plan to get rid of Othello with the help of his subordinate, Roderigo. Even though Othello loved Desdemona, Iago's rumours of an affair between Cassio and Desdemona drive him to the brink of insanity and, at Othello's peak of jealousy; he plans to kill Desdemona and Cassio with Iago's help. However, all does not go according to plan; first Cassio does not die and then the entire plot is revealed to by Iago's wife, Emilia. At this point Othello realizes he has killed Desdemona without just cause. He commits suicide claiming that "His only crime was loving too much". We blame Iago for the deaths that occur in the play, we also come to find that Iago's true personality were revealed to the other characters at the end of the play, but only at the expensive of other characters lives. ...read more.

"I hate the Moor: and it is thought abroad, that 'twixt my sheets he has done my office: I know not if't be true; but I for mere suspicion in that kind, will do as if for surety." The quotation shows that Iago has come across rumours and suspicions that Othello has slept with his wife and that he has intentions for sweet revenge. Iago decides that this is good enough a reason as any, even though he has no evidence whatsoever, he explains this when he says "will do as if for surety." The audience believes that this reason is inadequate and that it is only because of Othello's good fortune that he has decided to plot his revenge against Othello."For I fear Cassio with my nightcap too" Iago then later comments on the fact that now he suspects that Cassio has slept with his wife, the audience comes to realise that Iago either has a intense Paranoia throughout the play or whomsoever Iago feels resentful towards, he decides to add them to his plot in their demise or downfall. Throughout the play, Iago tends to degrade those around him, whom he resents, the main perpetrator being Othello, this shows Iago's true characteristics as he has to belittle those around him in order to better himself, he decides to include Desdemona, Emila and Othello and other characters throughout into his plot, even though they only spoke highly of him. ...read more.

Hell and night must bring this monstrous birth to the world's light." this quote suggests to the audience that Iago is saying his plot is so evil that hell and night shall give birth to it. Iago also states that "And out of her own goodness make the net, that shall enmesh them all." In this Iago says that he shall take Desdemona's pure heart's content - goodness in which he will spawn a net of destruction to ruin them all. This is where we get the idea of Iago thinking he is better than everyone else, he even states that "plume up my will" this is when we, the audience get the idea of Iago selfishness and how he is overseeing all other characters roles to reflect his efforts in which he uses to only better his own position. Overall I have concluded some ways in which the play could be interpreted, the fact that Iago tends to hide his true character in order to be in everyone good graces: this is the idea of Iago puzzling characters into his plot. I got this idea from the fact that he himself may love Desdemona and in that notion he decided to dispose of those who are any feelings for Desdemona other than himself. Othello is the main culprit, and thus the plot was focused on Othello's downfall, but also Roderigo as he too had feelings for Desdemona. ...read more.