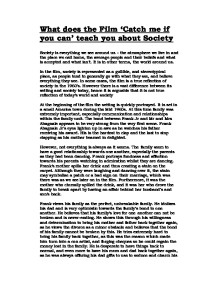 What does the Film 'Catch me if you can' teach you about Society Society is everything we see around us - the atmosphere we live in and the place we call home, the average people and their beliefs and what is accepted and what isn't. It is in other terms, the world around us. In the film, society is represented as a gullible, and stereotypical place, as people tend to generally go with what they see, and believe everything they see. In some cases, the film is a true reflection of society in the 1960's. However there is a vast difference between its setting and society today, hence it is arguable that it is not true reflection of today's world and society At the beginning of the film the setting is quickly portrayed. It is set in a small America town during the Mid 1960s. At this time family was extremely important, especially communication and relationships within the family unit. The bond between Frank Jr and Mr and Mrs Abagnale appears to be very strong from the very first scene. Frank Abagnale Jr's eyes lighten up in awe as he watches his father receiving his award. His is the hardest to clap and the last to stop clapping as his mother beamed in delighted. However, not everything is always as it seems. The family seem to have a good relationship towards one another, especially the parents as they had been dancing. ...read more.

the suit incident, and asks her, 'did you drop this in the car park? It must have slipped right off your neck'. The young woman is then flattered to be attracted to what appears to be a well supported handsome man and does not take great care into what she actually is doing, thus completing what he is trying to purchase or achieve. Frank is driven to run away simply because he can choose neither his mum nor dad. It is an impossible choice to make for any teenager, and this reflects that Frank is still only a kid as he runs away. He can't choose between his parents because he needs both of them, and we see this by his reaction when he was told of the divorce. In America during the 1960s, the type of clothing you wore portrayed your status, what type of job you had and even how much money you may have owned. For example, if you were seen in a suit, you would automatically be thought of as a richer, more upper class member of society. You would be looked up at, and would receive more public respect. This is portrayed in the film by Frank Abagnale Jr to a great extent. Knowing that clothing was a vital part in his scams, Frank Abagnale Jr used this to his advantage along with his wit and charm. He can be very deceiving simply by the type of clothes he is wearing. ...read more.

Frank's character is completely reflective of a teenager. His reaction when he finds out about his parents decision to split up is reflected by this completely. He decides automatically to run away and this shows that he is still young and cannot handle the responsibilities of being an adult and a man. He cannot live without both parents, and this shows his major dependability on both of his parents. The audience watching the film perceive him as a likable fun character within the play. They love seeing him get away with his scams, and believe that he is justified for his misdemeanours. His life changes drastically, when he is caught as he no longer has that sense of freedom, and he finally realises that there is more to life than just fun. He accepts to work for the FBI and this proves he has now developed some maturity and a sense of responsibility. Frank's relationship with Hanratty changes drastically in the play. They go from being enemies to being friends and become closer. They develop a trust between them and so the relationship changes, because Hanratty believes Frank will change, and so gives him a job and a new life. The film is a representation of what society was like in the 1960's. I don't believe it reflects what it is like now, since it is based on a true story on something which DID happen in the 1960's, and people nowadays are not as gullible or as easily impressed. BY IURI DE LIMA 10 RED ...read more.