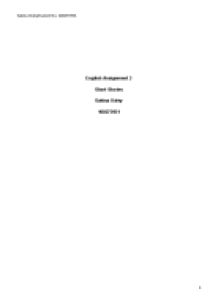 What does The Sons Veto tell us about attitudes towards social class in the Nineteenth century?

﻿Sakina OxleyStudent No. 100273931 English Assignment 3 Short Stories Sakina Oxley 100273931 ________________ What does The Son?s Veto tell us about attitudes towards social class in the Nineteenth century? Hardy uses the theme of social class in many of his novels and short stories and often details a character?s movement; either up or down the social ladder and the problems which may ensue. ?The Son?s Veto? was written in 1891 and tells the story of Sophy, a parlour maid who marries her respectable employer, the Reverend Twycott, and is faced with a life very different from her previous existence in the rural Wessex village of Gaymead. The story gives us a keen indication of the differences between members of the richer and poorer classes of nineteenth century society and also their attitudes towards each other. Hardy addresses attitudes towards social class through the marriage of Sophy to Reverend Twycott, through Randolph?s character and treatment of his mother and through Sophy?s relationship with her former sweetheart, Sam. The reader is first introduced to Sophy via a detailed description of her hair. ...read more.

from ?everyone who had known her former position; and also under less observation from without than they would have to put up with in any country parish.?(3) Through the marriage of Sophy and Twycott, Hardy is showing that while it is possible to climb the social ladder, it is impossible to truly mask a person?s origins. Twycott tried to educate Sophy in the refined ways of Society but ?Sophy the lady had her deficiencies.?(3) This is particularly evident through the relationship that Sophy has with her son, Randolph. Randolph is shown to be a privately educated young man with all the airs and graces of an aristocratic gentleman. From the outset, he is seen to treat his mother with disdain and disrespect when he corrects her grammar as if he were the parent and she were the child; ?Has, dear mother ? not have!? exclaimed the public-school boy, with an impatient fastidiousness that was almost harsh.?(2) Randolph is ashamed of his mother?s background and after his father?s death he begins to distance himself from her, should his affectation as a gentleman be marred by association with ?a mother whose mistakes and origin it was his painful lot as a gentleman to blush for.?(4) ...read more.

to do so himself by becoming a master greengrocer so that he can provide a respectable home for Sophy: ?I?d keep you as genteel as ever I could, dear Sophy.?(6) The great irony of Randolph?s refusal to allow his mother to marry is Sam is that by the end of the story, Sam has attained the respectable position in society that would have negated Randolph?s objections. Sadly it is too late for him to marry Sophy as she has pined away and died in loneliness. Through the characters and narrative in ?The Son?s Veto?, the reader is shown that the upper classes were often disdainful towards the working classes, tolerating them only as employees such as maids and servants. Hardy shows that while members of the working classes may have social aspirations, it is often impossible for them to break down class boundaries as, like Sophy, they will never truly be accepted by those around them and they cannot escape their backgrounds. The tragedy of Sophy?s life shows very clearly that, in the nineteenth century, social class had a significant impact on a person?s opportunities and the attitudes of others towards them. ...read more.