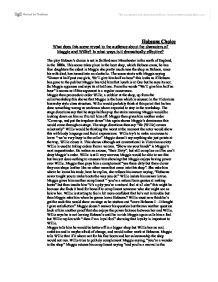 What does this scene reveal to the audience about the characters of Maggie and Willie? In what ways is it dramatically effective?

Hobsons Choice What does this scene reveal to the audience about the characters of Maggie and Willie? In what ways is it dramatically effective? The play Hobson's choice is set in Salford near Manchester in the north of England, in the 1880s. This scene takes place in the boot shop, which Hobson owns, he has four daughters the eldest is Maggie she pretty much runs the shop as Hobson, since his wife died, has turned into an alcoholic. The scene starts with Maggie saying "Dinner at half past one girls, We'll give him half an hour" this looks as if Hobson has gone to the pub but Maggie has told him that lunch is at One but he says its not. So Maggie appeases and says its at half one. From the words "We'll give him half an hour" it seems as if this argument is a regular occurrence. Maggie then proceeds to order Willie, a cobbler at the shop, up from the cellar/workshop this shows that Maggie is the boss which is unusual in the Victorians hierarchy style class structure. ...read more.

Maggie gives him another compliment " you're a natural born genius at making boots" but then insults him "it's a pity you're a natural fool at all else" this might be because she finds it hard for herself to compliment someone who she might see as below her. Willie is starting to feel a bit more confident that he's not in trouble but then Maggie asks him when he gonna leave Hobsons? Willie must now think he's got the sack this would show on stage as he stutters out "leave Hobsons I - I thought I gave satisfaction" Maggie doesn't answer his question but throws another question back at him another proof that she enjoys the power balance between her and Willie. Willie says he is not leaving Hobson's until he is rich Maggie again calls him a fool but Willie replies with " then I'm a loyal fool" showing that loyalty is important to Willie. Maggie tells him he would be better off in a bigger shop but Willie has no real, ambition and is maybe afraid of change, and would rather work at Hobsons. ...read more.

Willie asks why Maggie says its because he's so much unlike her father. Willie finds the situation awkward and tells Maggie that he finds it awkward Maggie says, "what's awkward about it?" Willie; "you talking to me like this" showing that Willie is uncomfortable about Maggie breaking Society's rules Maggie tells him she'd be stupid to let this chance slip, Willie cant believe that he a not very bright workman from Salford is someone's best chance. Willie tells her that he respects her for her salesmanship and looks but says he doesn't love her. Maggie tells him that they don't need love to be married and tells Willie to promise her that they will go through life together for the money. Willie still has doubts that they wouldn't get far without love but Maggie says she has enough love for both of them. This scene shows that Maggie is: Bossy, Determined, Clever, Ambitious and clear thinking E.g. she no's that to get out of Salford she can't wait for a rich person to marry her. And Willie is: Good at taking orders, Slow, Content, Not ambitious Good at his job George Myers ...read more.