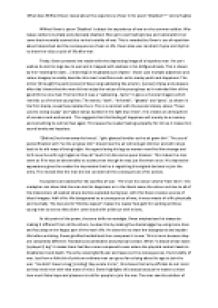 What does Wilfred Owen reveal about the experience of war in his poem Disabled?

﻿What does Wilfred Owen reveal about the experience of war in his poem ?Disabled?? ? Jenny Hughes Wilfred Owen?s poem ?Disabled? is about the experience of war on the common soldier. War leaves soldiers mentally and physically disabled. Men go to war feeling brave and nationalistic but come back mentally scarred due to the brutality of war. This is revealed by Owen?s use of repetition about blood-shed and the consequences of war on life. Owen also uses constant rhyme and rhythm to show the vicious cycle of life after war. Firstly, Owen presents the reader with the depressing image of a hopeless man. He can?t walk as he lost his legs due to war and is trapped with sadness in his disfigured body. This is shown by him ?waiting for dark ? [shivering] in his ghastly suit of grey?. Owen uses multiple adjectives and colour imagery to vividly describe this man?s sacrifices such as his manly youth and happiness. The simile ?[through] the park [voices] of boys rang saddening like a hymn, [voices] of play and pleasure after day? shows that the man did not enjoy the voices of the young boys as it reminded him of the good life he once had. ...read more.

At this point of the poem, the tone shifts to nostalgia. Owen emphasises this stanza by making it different from all the others, he does this by making the stanza bigger by using more lines and focusing on the happy part of the man?s life. He does this to show the background and explain life before enlisting. Owen glorifies football and then compares it to war. This is ironic because they are completely different. Football uses adrenaline and physical contact. When ?a blood-smear down [a player?s] leg? it makes them feel like a man compared to war where the physical contact leads to disablement and death. The army would glorify war and leave out the consequences, the brutality of war. Just from a little bit of pride an ordinary man can go as far as lying about his age to join the war. ?He didn?t have to beg; [smiling] they wrote his lie?, this shows that army officials do not mind as they need men with that state of mind. Owen highlights this stanza because he wants to show how much false hope and pleasure is told for people to join the war. The man saw the soldiers of Austria and Germany, not as individuals but as a country. ...read more.

This shows that he will be the one who will actually end up pitying them as they will feel sorry and say if only I knew what you went through but he?ll just hear them but not listen. At the beginning of the poem the rhyme is not as obvious as the end, but near the end the rhyme is clearer. The two words ?Goal? and ?soul? are used in the 5th stanza and they rhyme with each other. The rhyme makes the contrast between the two words more effective as the word ?goal? associates with victory and ?soul? associates more with death. Owen uses a rhetorical question to end his whole poem. Although he only repeats the question twice, it is very effective. The speaker feels sympathy for the man as he asks ?How cold and late it is! Why don?t they come [and] put him into bed? Why don?t they come?? With this Owen reveals that when times are hard no one will come and save you, all you?ll be doing is waiting, waiting for the time where it gets better, but it just won?t come and the ultimate last resort happens to be death. The pain, torture, sacrifices and blood-shed isn?t worth the little glory you get at the end of war. ...read more.