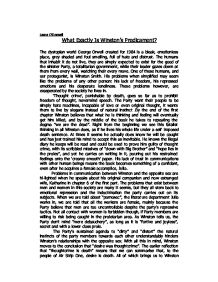 What Exactly Is Winston's Predicament?

Laura O'Donnell What Exactly Is Winston's Predicament? The dystopian world George Orwell created for 1984 is a bleak, emotionless place, grey shaded and foul smelling, full of hate and distrust. The humans that inhabit it do not live, they are simply expected to exist for the good of the sinister Party, a totalitarian government, while their leader gazes down at them from every wall, watching their every move. One of these humans, and our protagonist, is Winston Smith. His problems when simplified may seem like the problems of any other person: his lack of freedom, his repressed emotions and his desperate loneliness. These problems however, are exasperated by the society he lives in. 'Thought crime', punishable by death, goes so far as to prohibit freedom of thought, nevermind speech. The Party want their people to be simply hate machines, incapable of love or even original thought, it wants them to live by slogans instead of natural instinct .By the end of the first chapter Winston believes that what he is thinking and feeling will eventually get him killed, and by the middle of the book he takes to repeating the dogma "we are the dead". Right from the beginning we see this fatalist thinking in all Winston does, as if he lives his whole life under a self imposed death sentence. ...read more.

Winston is not a good judge of character. He assumes Julia is a thought policewoman wrongly and he assumes O'Brien is on his side through one "flash of the eyes", a move that later is shown to be pure folly. Winston seems to be searching for someone to share his life with throughout the first few chapters. He begins by "confessing" to the diary, next is the hope he places in O'Brien, but neither satisfies him. Julia is the unexpected saviour who goes from a suspicious woman in a corridor to the love of Winston's life in about 4 chapters. The problem as far as Julia is concerned, does not start until her and Winston are captured and sent to the Ministry of Love. Up until then their inability to really honestly believe they are in danger has done them well. They do talk allot about what will happen when they are caught, but the feeling is that they are as safe as the coral in the paperweight while they are still together. Blindly in love has never been so apt a phrase. They are so involved with what is going on in their glass-enshrouded world that they fail to realise Mr Charrington must be a fake and that the bedroom is a set up all designed to trap them. ...read more.

They are the traitors to their 'benefactors', something that Julia undoubtedly was to Winston in the short time they were together. Could it also be coincidence that two out of those three betrayed Julius, the masculine version of Julia? The torture Winston endures, both mentally and physically, can only be described as extreme. The imagery in the final few chapters is at once gruesome and breathe taking. Winston is told he needs to learn, understand and then accept the Party and Big Brother. O'Brien then describes the Party's idea of the perfect future society to Winston: "a boot stamping on a humans face - forever". Its now we realise that despite Winston's death, this will happen in that world if things carried on as they were. It's at this point that nearly all hope is lost. Next is the betrayal of Julia, the one last thing keeping Winston going. It is a certainty by now that there will be no happy end and that Winston will die and life outside in Air Strip One will remain the same. Winston's predicament is not then to do with love and loss, it's to do with futility. For all he did, for all the rules he broke, for all the rebellion he thought and wrote, nothing changed. The Party remains in power and no future generations were saved. Despite all his good intentions Winston dies broken, hopeless and loveless, a "non-person" who as good as never existed. ...read more.