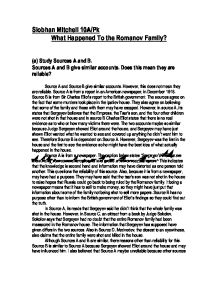 What Happened To the Romanov Family?

Siobhan Mitchell 10A/Pk What Happened To the Romanov Family? (a) Study Sources A and B. Sources A and B give similar accounts. Does this mean they are reliable? Source A and Source B give similar accounts. However, this does not mean they are reliable. Source A is from a report in an American newspaper, in December 1918. Source B is from Sir Charles Eliot's report to the British government. The sources agree on the fact that some murders took place in the Ipatiev house. They also agree on believing that some of the family and those with them may have escaped. However, in source A, its states that Sergeyev believes that the Empress, the Tsar's son, and the four other children were not shot ...read more.

Therefore Source B is dependent on Source A. However, Sergeyev was the first in the house and the first to see the evidence so he might have the best idea of what actually happened in the house. Source A is from a newspaper. The caption below states 'Sergeyev's findings are known only from comments of people who spoke to him or read his report.' This indicates that the knowledge is second hand and information may have distorted as one person told another. This questions the reliability of this source. Also, because it is from a newspaper, may have had a purpose. They may have said that the tsar's son was not shot in the house to raise hopes that Russia could go back to being ruled by the Romanov family. ...read more.

However, in Source C, an extract from a book by Judge Sokolov, Sokolov says that Sergeyev had no doubt that the entire Romanov family had been massacred in the Romanov house. The information that Sergeyev has supposed have given differs in the two sources. Also in Source D, Medvedev, the closest to an eyewitness, also claims that the entire family were shot and killed in the house. Although Sources A and B are similar, there reasons other than reliability for this. Source B is similar to Source A because Sergeyev showed Eliot around the house and may have influenced him. I also believed that Source A maybe unreliable because other sources about this disagree with it. In Source C it says that Sergeyev said the opposite thing to Source A and in Source D, Medvedev, says all the Romanov were killed. ...read more.