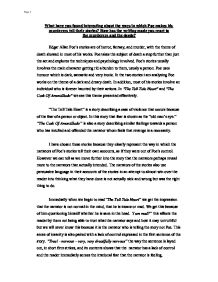 What have you found interesting about the ways in which Poe makes his murderers tell their stories? How has the writing made you react to the murderers and the deeds?

What have you found interesting about the ways in which Poe makes his murderers tell their stories? How has the writing made you react to the murderers and the deeds? Edgar Allan Poe's stories are of horror, fantasy, and murder, with the theme of death showed in most of his works. Poe takes the subject of death a step further than just the act and explores the techniques and psychology involved. Poe's stories usually involves the main character getting rid a burden to them, usualy a person. Poe uses humour which is dark, sarcastic and very ironic. In the two stories i am analysing Poe works on the theme of a dark and dreary death. In addition, most of his stories involve an individual who is forever haunted by their actions. In "The Tell Tale Heart" and "The Cask Of Amontillado" we see this theme presented effectively. "The Tell Tale Heart" is a story describing a case of violence that occurs because of the fear of a person or object. In this story that fear is shown as the "old man's eye." "The Cask Of Amontillado" is also a story describing similar feelings towards a person who has insulted and offended the narrator whom feels that revenge is a neccessity. ...read more.

Probably the strongest theme in the story that is used is Irony. This is shown all throughout the story for example when Fortunato says "Enough, the cough is a mere nothing; it will not kill me. I shall not die of a cough." The irony is that Fortunato is unknowingly stating exactly what Montressor intends to do. This is shown as another technique and clue given to the reader to show the fate of Fortunado and again shows Fortundo's arrogance as everyone but him realises this. While in the wine cellar, Montresor says to Fortunato, "Come, we will go back; your health is precious. You are rich, respected, admired, beloved; you are happy, as once I was." Montresor is once again using reverse psychology so that Fortunado becomes more intent on moving on. The narrator uses this technique builds up suspense, the reader reacts to this by becoming more intent on knowing the ending and is persuasive to influence the reader to believe that what the narrator is doing is not wrong or corrupt. This is another interesting way which shows how effective it is to allow the narrator tell the story. Referring back to "The Tell Tale Heart" we see a similar technique being used where the narrator builds up the suspense by using detailed, long-winded description and long calculated actions. ...read more.

Montressor shows feelings of remorse for murdering a friend of his, as he is a proud man and throughout the story has shown no remorse or guilt he blames this feeling in his heart on the environment, "dampness of the catacombs," and the reader reacts to this by feeling pityful for Montresor. In conclusion to the analysis of these stories I can dra is that by Poe allowing the narrators to tell their own stories we find it interesting how we know what is going to happen for t is as if the narrator is talking to us throughout the story, sharing with us their emotions and thoughts. Each of Edgar Allen Poe's stories are presented to us as if they were confessions to the reader for by the end of the stories we can see the remorse and guilt they feel. The techniques the narrators use to hide their emotions and show that they are in total control include irony, persuasive language, arrogance, reverse psychology and many other. These techniques help the reader to see how the narrator's obsessive, psychopathic and perverse attitudes. As the narrators are telling the stories and not Poe they occasionally go off the subject and reveal more to us then they maybe anticipated and thus we feel sorry for them at the end, because we get to know the narrator more. ...read more.