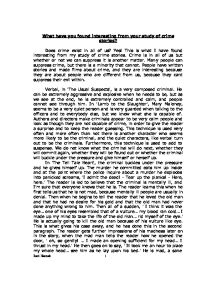 What have you found interesting from your study of crime stories?

What have you found interesting from your study of crime stories? Does crime exist in all of us? Yes! This is what I have found interesting from my study of crime stories. Crime is in all of us but whether or not we can suppress it is another matter. Many people can suppress crime, but there is a minority that cannot. People have written stories and made films about crime, and they are interesting because they are about people who are different from us, because they cant suppress their evil within. Verbal, in 'The Usual Suspects', is a very composed criminal. He can be extremely aggressive and explosive when he needs to be, but as we see at the end, he is extremely controlled and calm, and people cannot see through him. In 'Lamb to the Slaughter', Mary Maloney, seems to be a very quiet person and is very guarded when talking to the officers and to everybody else, but we know what she is capable of. Authors and directors make criminals appear to be very calm people and look as though they are not capable of crime, in order to give the reader a surprise and to keep the reader guessing. This technique is used very often and more often than not there is another character who seems more likely to be the criminal, and the quiet characters, like verbal turn out to be the criminals. Furthermore, this technique is used to add to suspense. ...read more.

The camera then goes back to when Verbal was with the policeman, and he says, "The greatest trick the devil ever pulled was convincing the world he didn't exist... And just like that he was gone." Then the film finishes. I found this interesting because, he himself, otherwise known as Keyser Soze, was considered to be the devil. Although not many people knew he was the Keyser because he did such a good job at pretending to be a cripple. He pulled the same trick the devil pulled, he convinced everyone he wasn't the devil and that he did not exist to be the devil, and that he wasn't evil at all. He then pulled another of the devil's tricks... he vanished. 'Lamb to the Slaughter' has a similar criminal, compared to 'The Usual Suspects', in the way that you don't expect them to commit such crimes. Mary Maloney is just the quiet housewife type, wouldn't expect her to hurt a fly, but would expect her to have your dinner ready by the time you get home from work. She seems like a very calm person, ' there was a slow smiling air about her, and about everything she did'. This gives the impression that she is a calm and happy person. Moreover, she was six months pregnant, ' for this her sixth month with child'. I don't believe that anyone would expect a pregnant woman to be a murderer. In 'Tell Tale Heart' suspense is created in the second from last paragraph, when he begins to hear a ringing noise in his head. ...read more.

Also because the ending is so surprising. Although some people maybe lovers of crime stories, and would have thought that he was the mass murderer and drug dealer, straight away, but to many others he was nowhere near the top of their list. The structure of the plot in 'Lamb to the Slaughter', is completely different to 'The Usual Suspects'. It is different because it doesn't start with something big already happening. It has a very slow start, and is very boring. Even throughout the whole of the story the pace never picks up and nothing exciting happens. Mrs Maloney murders her husband, and then there is the risk of her being caught but that is it. Whereas in 'The Usual Suspects', the pace of the story goes up and down. Also, in the short story, there isn't anyone narrating the story. So the reader knows that what is being told is the truth. In the film, however, Verbal Kint is telling the story and the watcher although believes him, knows that there may be an element of falseness in what he is saying. The watcher finds out later that most of what he said was a lie. In 'Lamb to the Slaughter' the reader knows who the killer is once the murder has been committed, and so there is a different type of suspense created. The reader is waiting to see if Mrs Maloney gets found out. Whereas in the film, the watcher is waiting to find out whom the mass murderer is and whether he will be found out. There are two lots of suspense and so you may say that the film is more interesting to watch. 2 Ravi Hannah 1 ...read more.