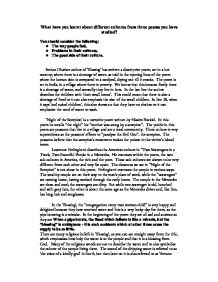 What have you learnt about different cultures from three poems you have studied?

What have you learnt about different cultures from three poems you have studied? You should consider the following: * The way people feel, * Problems in their cultures, * The good side of their culture. Imtiaz Dharker author of 'Blessing' has written a descriptive poem, set in a hot country, where there is a shortage of water, as told in the opening lines of the poem where the human skin is compared to a seedpod, drying out till it cracks. The poem is set in India, in a village where there is poverty. We know that this because firstly there is a shortage of water, and secondly they live in huts. In the last line the author describes the children with 'their small bones'. This could mean that there is also a shortage of food or it can also emphasis the size of the small children. In line 18, when it says 'and naked children', this also shows us that they have no clothes or it can emphasise the need of water to wash. 'Night of the Scorpion' is a narrative poem written by Nissim Ezekiel. In this poem he recalls "the night" his "mother was stung by a scorpion". The public in this poem are peasants that live in a village and are a rural community. There culture is very superstitious as the peasants' efforts to "paralyse the Evil One", the scorpion. The peasants believe that the scorpion's movement makes the poison in the victim's blood move. Lawrence Ferlinghetti describes the American culture in "Two Scavengers in a Truck, Two Beautiful People in a Mercedes. He contrasts within the poem, the two sub-cultures in America, the rich and the poor. ...read more.

Instead of metaphor or simile the images are of what was literally present (the candles and the lanterns and the shadows on the walls). The poem is in the form of a short narrative. One final interesting feature to note is the repeated use of reported (indirect) speech - we are told what people said, but not necessarily in their exact words, and never enclosed in speech marks. The poem may surprise us in the insight it gives into another culture: compare Ezekiel's account with what would happen if your mother were stung by a scorpion (or, if this seems a bit unlikely, bitten by an adder, say). Some comments about Nissim Ezekiel that you might find helpful in relation to Night of the Scorpion are these: he writes in a free style and colloquial manner (like ordinary speech); he makes direct statements and employs few images. * The title of the poem seems more fitting almost to an old horror film - do you think it is a suitable title for the poem that follows? * How do the people try to make sense of the scorpion's attack, or even see it as a good thing? * Are scorpions really evil? Does the poet share the peasants' view of a "diabolic" animal? * How does the attack bring out different qualities in the father and the mother? * What does the poem teach us about the beliefs of people in the poet's home culture? * In what way is this a poem rather than a short story broken into lines? * How does the poet make use of what people said, to bring the poem to life? ...read more.

It holds them together "as if anything at all were possible/between them". They are separated by a "small gulf" and the gulf is "in the high seas of democracy" - which suggests that, with courage and effort, anyone can cross it. But the poet started this statement with "as if" - and we do not know if this is an illusion or a real possibility. The form of the poem is striking on the page - Ferlinghetti begins a new line with a capital letter, but splits most lines to mark pauses, while he omits punctuation other than hyphens in compound-words, full stops in abbreviations and occasional ampersands (the & symbol). The poem challenges the reader - are we like the cool couple or the scavengers? And which is better to be? Of which couple does the poet seem to approve more? TV ads may be "odorless" but without garbage collectors, we would be overwhelmed by unpleasant smells - especially in the heat of San Francisco. The garbage truck and the Mercedes in a way become symbols for public service and for private enterprise. * How does this poem show the gap between rich and poor? * Does the poet really think "everything is always possible", or is this an illusion? * Why does the poet call the couple in the Mercedes "beautiful people"? How does he use this phrase in a different sense from what it originally meant? Does the poet approve more of the scavengers or the beautiful people? * What do you think of how the poem looks on the page? Does this help you as you read it? * Perhaps a modern society needs both architects and street-cleaners. But is it right that we should pay them so unequally? Which would you miss the most if they stopped working? ...read more.