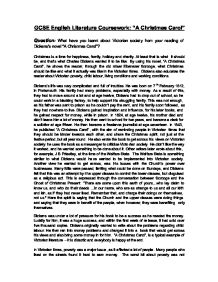 What have you learnt about Victorian society from your reading of Dickenss novel A Christmas Carol?

GCSE English Literature Coursework: "A Christmas Carol" Question: What have you learnt about Victorian society from your reading of Dickens's novel "A Christmas Carol"? Christmas is a time for happiness, family, holiday and charity. At least that is what it should be, and that's what Charles Dickens wanted it to be like. By using his novel, "A Christmas Carol", he shows the reader, through the old miser Ebenezer Scrooge, what Christmas should be like and what it actually was like in the Victorian times. Dickens also educates the reader about Victorian poverty, child labour, living conditions and working conditions. Dickens's life was very complicated and full of troubles. He was born on 7th February 1812, in Portsmouth. His family had many problems, especially with money. As a result of this, they had to move around a lot and at age twelve, Dickens had to drop out of school, so he could work in a blacking factory, to help support his struggling family. This was not enough, as his father was sent to prison as he couldn't pay the rent, and his family soon followed, as they had nowhere to live. Dickens gained inspiration and influence, for his later books, and he gained respect for money, while in prison. In 1824, at age twelve, his mother died and didn't leave him a lot of money. He then went to school for two years, and became a clerk for a solicitor at age fifteen. He then became a freelance journalist at age seventeen. In 1843, he published "A Christmas Carol", with the aim of reminding people in Victorian times that they should be kinder towards each other, and share the Christmas spirit, not just at the festive period, but all year round. He also wrote the book to get across his views on Victorian society: he uses the book as a messenger to criticise Victorian society. ...read more.

He is already unhappy about paying taxes, so he would obviously not like to be asked to pay more money towards the poor. In the story, Scrooge had no feelings toward his family or friends and only had a professional relationship with them, creating a hostile feeling between them. For example, Bob Cratchit's wife did not want to toast to Scrooge at the Christmas dinner because of the way he treats Bob Cratchit. Another example of bad hostile relationships leading to no friends is Jacob Marley. A quote about Marley is that Scrooge was Marley's "sole executor, his sole administrator, his sole assign, his sole residuary legatee, his sole friend, and sole mourner." This tells that if you treat everyone badly, nobody will care about you. This could be a warning for what might happen to Scrooge if he doesn't change his ways. Many people in the novel have a negative view of Scrooge because of his attitude. For example, when Scrooge has died, the thieves are able to steal Scrooge's possessions because nobody cares about Scrooge. Scrooge sees money as an important factor in life and as a result of this money influences him through most of his life. This is shown when he is talking to the Ghost of Christmas Present. The Ghost says that he has over eighteen-hundred brothers. Scrooge replies "A tremendous family to provide for." This shows that he is always thinking about money. The fact that he always thinks about money, results into his ex-fianc�e, Belle, breaking up with him. Scrooge's nephew, Fred, is an important character, and is a direct contrast to Scrooge. He is the perfect embodiment of Christmas spirit, unlike his uncle. On page seven, Dickens uses the nephew to outline the "perfect" vision of Christmas. According to Scrooge, the nephew "has no right to be happy", but he is still content and excited, despite the fact that he is poor. ...read more.

However, the Victorians saw the fire as a symbol of warmth and hope. On page seventy-two, the Cratchits gather around the fire on Christmas: "Then all the Cratchit family drew around the hearth." The hearth is the floor of the fireplace. This is a historical reference as today a family would not need to sit around a fireplace as most homes have central heating. Also, today a family would gather around a TV and watch it for entertainment. So the fire could be considered as a form of entertainment for the poor people of the Victorian era. In Scrooge's office, there are two fireplaces; Scrooge has the larger fireplace, while Cratchit only has the smaller fireplace - "Scrooge had a very small fire, but the clerk's fire was so very much smaller that it looked like one coal." Cratchit can't even add to his fire as "Scrooge kept the coal-box in his own room." This is a representation of most Victorian workplaces: the boss would take advantage of the employee. The employee would not argue with the way things were run as he needs his job so he can support his family. From the book, "A Christmas Carol", the reader can learn quite a lot about how the Victorians lived their lives. Dickens shows the true value of Christmas, how significant money really is to living a happy life and how being nice to people can change the way people treat you. Dickens also exposed the rift that there was between the top of the class table and the bottom. The reader is also shown how money influenced people but had no affect on others and this affected workplace, employees and their employers. Throughout the story, Dickens paints a very clear picture of what life was like in Victorian society. He highlights the flaws within Victorian society that helped lead to poverty, child labour, poor living conditions and working conditions. Dickens made the most of his ability to write stories and used his skill to his advantage to produce an educational, yet interesting story. ?? ?? ?? ?? ...read more.