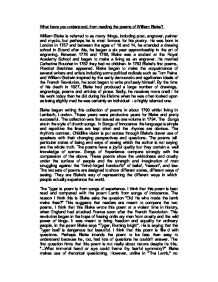 What have you understood, from reading the poems of William Blake?

What have you understood, from reading the poems of William Blake? William Blake is referred to as many things, including poet, engraver, painter and mystic, but perhaps he is most famous for his poetry. He was born in London in 1757 and between the ages of 10 and 14, he attended a drawing school in Strand after this, he began a six year apprenticeship in the art of engraving. Between 1778 and 1789, Blake was a student at the Royal Academy School and began to make a living as an engraver. He married Catherine Boucher in 1782 they had no children. In 1783 Blake's first poems, Poetical Sketches appeared. Blake began to make the acquaintance of several writers and artists including some political radicals such as Tom Paine and William Godwin inspired by the early democratic and egalitarian ideals of the French Revolution, he soon began to write profusely himself. By the time of his death in 1827, Blake had produced a large number of drawings, engravings, poems and articles of prose. Sadly, he receives more credit for his work today than he did during his lifetime when he was often looked upon as being slightly mad he was certainly an individual - a highly talented one. Blake began writing this collection of poems in about 1790 whilst living in Lambeth, London. These years were productive years for Blake and pretty successful. The collection was first issued as one volume in 1794. The Songs are in the style of church songs. ...read more.

. . Blessing and honour and glory and power Be to Him who sits on the throne, And to the Lamb, forever and ever!" I think that Blake knew the old and new testament of the bible really well as he came up with the concept of the lamb. The Lamb" is a poem which glorifies the creator of the lamb. It has the feeling of a nursery rhyme through the use of repetition and a simply rhyme scheme. The use of soft, gentle phrases, such as "tender voice" and "little child," also adds to the feeling that this is an innocent poem to read to a young child. The imagery and description of the lamb as "tender," "meek" and "woolly" further supports that nursery rhyme atmosphere. The idea that the creator is kind and good is shown two was in "The Lamb." First, a series of rhetorical questions followed by an immediate and simple answer: "He is meek, and He is mild." And second, by using the symbol of the lamb to represent the creator. The lamb is perhaps the gentlest creature we can think of, and in Christianity Jesus Christ is often referred to as a lamb. Just as innocence is a much simpler state that that of experience, "The Lamb" is simpler in both designs and concept than "The Tyger." As in Blake's earlier poem, "The Tyger" makes use of rhetorical questioning. However, unlike in "The Lamb," no answer to the questions is provided to the reader. ...read more.

I think that the message one of the possible meanings of this poem is that no matter how bad life gets, no matter how bad the church is, in the after life you will be with god, and the children are celebrating this meaning. The other possibility I think is that this belief is a fraud from the church and the society of that time to make the children accept their lives as slaves. The sixth stanza now describes Tom waking up and him and the other children going back to work. The theory that the children have been conditioned is backed up with the contrast of what the morning was like, cold, while Tom is happy and warm. The last line is clashing and shows the innocence of the children that has been abused by society, as all sweepers do their jobs, but many end up dead, deformed or dying of lung cancer and other lung diseases. William Blake wrote "The Chimney Sweeper" of "Songs of Innocence" in 1789. This poem shows that the children have a very positive outlook on life. They make the best of their lives and do not fear death. This is quite the opposite in it's companion poem in "Songs of Experience" which was written in 1794. In this poem, the child blames his parents for putting him in the position he was in. He is miserable in his situation and he also blames "God & his Priest & King". This point of view is different from that of its companion poem because the chimney sweeper has been influenced by society and has an "experienced" point of view. ...read more.